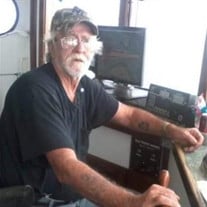 Albert Gary Roberson, 68 of Gautier, MS., passed away Thursday, December 5, 2019 at his home in Gautier. He was born April 5, 1951 in Mobile County, Al., to Albert D. Roberson, Jr. and Georgia Rice Bosarge. Gary was a lifelong commercial fisherman and boat captain that had the water in his blood. In addition to his parents, Gary was preceded in death by his life partner, Judy Rice. He is survived by his daughter, Sharmette "Shelley" Guillotte, a sister; Sherrill Roberson, two brothers; Keith (Elaine) Roberson, Sr., and John "Tony" (Simone) Bosarge. one granddaughter, Terra Guillotte, grandson, Michael Guillotte, great-granddaughter, Bayleigh Smith. Three step daughters, Amanda Pope, Samantha Brown, and Amber Powell. The family would like to express their gratitude to Kindred Hospice for the excellent care given to Gary during his illness. Services will be announced at a later date. You sign the online register book and send condolences to the Roberson family at www.holderwellsfuneralhome.com Holder-Wells Funeral Home, 4007 Moss Point, MS., is in charge of arrangements.

The family of Albert Gary Roberson created this Life Tributes page to make it easy to share your memories.

Send flowers to the Roberson family.