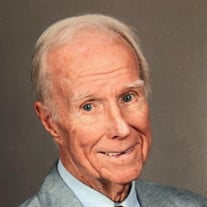 Albert Mack Simmons passed away on December 3, 2020 at Bethany House Hospice in Auburn, Alabama. He was born on January 22, 1928 to Lenora and Albert Simmons. He grew up in Moss Point, Mississippi, running barefoot all over town with his big brother Buddy. He played football in high school, then captured the heart of Vivian McDavid and whisked her away to Germany where he served in the army at the end of the Korean War. They had two daughters, Lenora Edna and Lisa Ann. When they returned to the states, he began working as a typewriter repairman. Eventually he went to work for Control Data Corporation, working on the huge mainframe computers that were built in the 1960s, then supervising the people who did the repairs, and eventually managing entire divisions of customer engineering. He was stationed in Zurich, Switzerland, then was promoted to the home office in Minneapolis where his territory included Asia, Africa, and North America. He retired in 1986 and enjoyed 30 years of retirement, returning with Vivian to Moss Point. He used to joke that Control Data got a bad deal when they gave him early retirement! He exhibited the best qualities of the Greatest Generation, including integrity, humility and a superior work ethic. He was a gentleman and a gentle man, with a tender and protective heart, especially for his daughters and grandchildren. He embraced the job of grandfather, putting everything aside when they visited in order to entertain them. He once said if he believed in reincarnation, he would want to come back as his own grandchild! He faithfully served his church and community in numerous positions. He enjoyed a cigar every afternoon on the deck, recently positioning his chair so that he could keep an eye on Vivian when she was sick. He was her strength when she became weak and he nursed her during her final illness. After 69 years of marriage, they were only separated for three months before he joined her in paradise. He is predeceased by his wife Vivian, his daughter Lenora Simmons Lassiter, his brother Lewis (Buddy) Simmons, and sister Fayla Simmons Beckham. He will be missed by his sister Betty Simmons Gardner; daughter Lisa Simmons Royal; sons-in-law Barry Lassiter and Roger Royal; grandchildren Sarah Lassiter Thornton, Eric (Jennifer) Lassiter, Emma Royal, Claire (Mark) Royal Barber, Ellis Royal; great grandchildren Willis Mack Lassiter, Tripp Thornton, and Molly Grace Thornton. Mack’s family would like to thank his friends for their support and love, and the staff at East Alabama Medical Center and Bethany House for their kind care. Graveside service will be held Saturday, December 5, 2020, at 2:00 p.m. at Machpelah Cemetery, 5112 Machpelah St., Pascagoula, MS. 39567 Holder-Wells Funeral, Moss Point, MS., is in charge of arrangements.

Albert Mack Simmons passed away on December 3, 2020 at Bethany House Hospice in Auburn, Alabama. He was born on January 22, 1928 to Lenora and Albert Simmons. He grew up in Moss Point, Mississippi, running barefoot all over town with his big... View Obituary & Service Information

The family of Mr. Albert Mack Simmons created this Life Tributes page to make it easy to share your memories.

Albert Mack Simmons passed away on December 3, 2020 at Bethany...

Send flowers to the Simmons family.