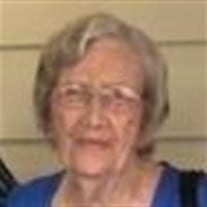 Annie Mae Williamson Couch, 88, of Moss Point, MS passed from this life on Wednesday, January 29, 2020 in Pascagoula, MS. She was born in Neshoba Co., MS on November 6, 1931 to Dinkie Melton and Amelia Lynch Williamson. She was a loving mother,... View Obituary & Service Information

The family of Annie Mae Couch created this Life Tributes page to make it easy to share your memories.

Send flowers to the Couch family.