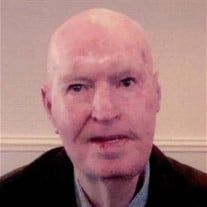 Boyce Carcle “Red” Leathers, was born on November 23, 1928 in Itawamba County, MS. He passed away on Saturday, September 14, 2019 in Grand Bay, AL. Red attended Houston Consolidated School. He proudly served his country during the Korean War as an Airborne Medic Aidman. Red retired from Corning as an Operator after 26 years. He enjoyed spending time with his church family, hunting and fishing, and in later years, working on old lawnmowers. Red is survived by his wife, Genevieve Leathers; children, Boyce Levain Leathers and wife Nancy, Juanita Morphis, and Craig Leathers and wife Bobbie; brother, Dallas Leathers and wife Dean, and numerous grandchildren, great-grandchildren, nieces, nephews, and many friends. He was preceded in death by his parents, Carcle and Ammie Leathers; a son, Raymond Leathers; and 2 siblings Lois Pettigo and Bonnie Leathers. Funeral Services will be held on Thursday, September 19, 2019, at 10 am, with the family to receive friends starting at 9 am, at Holder-Wells Funeral Home, 4007 Main St., Moss Point, MS, 39563, with Pastor Sidney Davis officiating. Pallbearers will be Matthew Johnson, James Edward Morphis, Garrett Madison, and Gavin Madison. In lieu of flowers the family requests that memorials be made in Red’s name, to St. Jude’s Children’s Hospital, and/or the Gideon’s Bible Program. The family would like to offer a special thank you to the Staff of Grand Bay Convalescent Home for their loving care of Red in his final time with them. You are invited to send condolences to the family at www.holderwells.com. Arrangements are by Holder Wells Funeral Home.

The family of Boyce "Red" Leathers created this Life Tributes page to make it easy to share your memories.

Send flowers to the Leathers family.