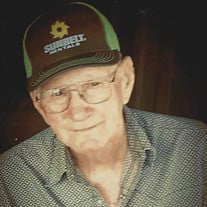 On February 20th, 2021, Charles Duiet McQueen Sr. passed away peacefully at home surrounded by his family. He was born September 14th, 1944 in Pascagoula, MS to Joe and Bessie McQueen. He was a member of Community of Christ Church. An innocent game of penny- a- walk and a few walks around the house turned into a lifelong marriage to the love of his life Gloria Mae Noble McQueen on August 17th, 1963. Charles had many hobbies all of which revolved around his love for the outdoors. He loved planting a garden every spring just to give away most of his hard-earned harvest to friends and family. He was an avid outdoorsman, and he passed his passion for hunting and fishing down to his children, grandchildren, and great grandchildren. There was a never-ending supply of hunting and fishing stories to listen to any time you stopped by. He loved all types of fishing but the infamous “White Perch” was his fish of choice. Most Octobers he could be found running his hand built freshwater shrimp traps for bait to go fill the livewell with White Perch. In October of 1970 Charles started his career as a pipe welder in local union 568. He used the skills he learned to have a successful career that led to him retiring from Ingalls Shipbuilding in 2004. He is survived by his four children, Chuck (Cathy) McQueen, Steven (Charrie) McQueen Sr., Ronnie (Mikelyn) McQueen, Darlene (Gary) Emerson, eleven grandchildren and sixteen great grandchildren. Charles was preceded in death by his wife Gloria Mae Noble McQueen, parents Joe and Bessie McQueen, sister Claire (Armond) Cannette, sister Janie (Junior) Ferguson, sister Delores “Lil Sister” (Lewis) Brewer, and brother Jake McQueen. Pallbearers will be Steven McQueen Jr., Sterlin McQueen, Adam McQueen, Mckinley McQueen, Joey McQueen, Tommy Ferguson and Elvin Kasby. Honorary Pallbearers will be Josh Slayter and Joseph Stewart. Visitation will Wednesday February 24, 2021 from 10am to 11am at Holder-Wells Funeral Home 4007 Main St. Moss Point, MS 39563. The funeral service will begin at 11am from the chapel. Burial will follow in the Community of Christ cemetery in Escatawpa MS. Due to the Covid-19 Pandemic face mask and social distancing will be required in the funeral home and at the cemetery. You may sign the online register book and send condolences to the McQueen family at www.holderwellsfuneralhome.com Holder-Wells Funeral Home in Moss Point, Mississippi is charge of the arrangements.

On February 20th, 2021, Charles Duiet McQueen Sr. passed away peacefully at home surrounded by his family. He was born September 14th, 1944 in Pascagoula, MS to Joe and Bessie McQueen. He was a member of Community of Christ Church. An innocent... View Obituary & Service Information

The family of Mr. Charles D. McQueen created this Life Tributes page to make it easy to share your memories.

Send flowers to the McQueen family.