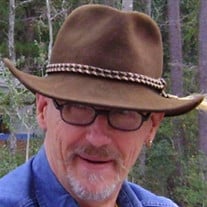 Charles William Schoener, age 73, of Moss Point Mississippi, went to be with his son, Brent and his beloved pets, Louise and Bugger Red Saturday, October 3, 2020. Charles was born at Jackson County Hospital on July 7, 1947 to Walter and Bea Schoener. He was the oldest brother to Jack and Diane. Raised in Grand Bay, Alabama, he was an active Boy Scout and a member of First United Methodist Church of Grand Bay. He was a proud graduate from Mobile County High School in 1965 and loved reconnecting with his classmates at school reunions. After graduation, Charles worked for International Paper as a crane operator in the wood yard until he retired, where he also served as the Union Representative. Being proud of his country, Charles joined the National Guard and served honorably. Charles had two sons, Brent and Wesley, that he loved very much. If NASCAR was on, Charles was watching it with “his girls” Rita and Skeeter. While all of his dogs were important to him, Louise and Bugger Red held a special place in his heart and he was devastated when Louise passed from a snake bite. Being a retired Member of the ASGARDS Motorcycle Club and an avid supporter of the BANDIDOS Motorcycle Club, Charles developed a strong Brotherhood with bikers locally and worldwide. Charles loved riding his motorcycle, being an NRA member, and acquiring tactical weapons. His favorite pastime was listening to music while accompanying, playing his spoons. While Charles was a private man, he actively participated in many charitable events with his MC and was a generous supporter of the SPCA and Paralyzed Veterans Project. Charles had many friendships and family connections that he cherished. He connected daily with friends and family and touched many lives with his generosity, stories, and love for all things in nature. Charles is survived by his brother Jack Walter Schoener (Janet), sister Hazel Diane Schoener Seaman (Danny), son Charles Wesley Schoener, multiple Grandchildren, Great-Grandchildren, nieces, nephews, cousins, and friends. Preceded in death by his father Walter Amandon Schoener, his mother Beatrice Natalie (Flanagan) Schoener, and his son Jack Brent Schoener. Charles will be missed daily, is loved by many, and we find comfort knowing he is now with Brent, Bugger Red, and Louise. To share condolences and sign the online register book for Mr. Charles, please visit www.coastalfuneralhome.net In Lieu of flowers, please make donations to any local animal shelter. A visitation will be held for Charles, on Saturday October 24, 2020 from 10:00AM-11:00AM at Holder-Wells 4007 Main Street Moss Point, Ms. A Celebration of Life Service will begin at 11:00AM, in Holder-Wells Main Street Chapel, with Larry Redmon officiating. Holder Wells Coastal Funeral Home is in charge of the arrangements.

Charles William Schoener, age 73, of Moss Point Mississippi, went to be with his son, Brent and his beloved pets, Louise and Bugger Red Saturday, October 3, 2020. Charles was born at Jackson County Hospital on July 7, 1947 to Walter and Bea... View Obituary & Service Information

The family of Mr. Charles William Schoener created this Life Tributes page to make it easy to share your memories.

Send flowers to the Schoener family.