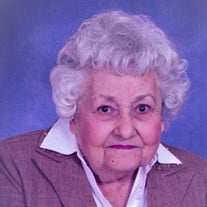 Claire Audrey Grimme, 93, of Pascagoula, MS, passed away on Tuesday, August 13, 2019, at The Sanctuary House in Moss Point. Claire was born in New Orleans, LA, on May 29, 1926. Straight out of high school, she went to work for the FBI as a clerk-typist. She also worked as a clerk with the Navel Station in New Orleans, LA. She served in the Air Force from 1953 until 1955. In 1974, she went to work for Supship and remained there until she retired in 1995. She enjoyed her work and travels throughout her career. Claire was preceded in death by her parents, Charles P. Naquin and Elizabeth Rourke Naquin, step-mother, Ruth Naquin, daughter, Michele Ann Hoefler, son in law, Larry Hoefler, daughter in law, Kim Grimme, sister, Shirley Cauley, and brothers, Donald Naquin and Sonny Naquin. She is survived by her three sons; Val Edward Grimme, Jr., Michael J. (Terry) Grimme, and Gerald S. (Angie) Grimme. 8 grandchildren; Joshua (Barb) Deason, Michael Aaron Grimme, Ryan (Whitney) Grimme, Matthew Deason, Preston (Caitlyn) Grimme, Jessica (Bradley) McGee, Kristen (Justin) Fayard, Gencie (Carlos) Belmonte. 14 Great-grandchildren and 3 Great-great grandchildren. Claire always had a good sense of humor and happy laugh. she was a good mother, who loved and took care of her family. When she told you to do something, she meant business. So, you had better do what she told you. She was a lifelong Catholic and loved her Church. Even after she got dementia, she would make the sign of the Cross when we passed the Church. She may not have always known who you were or where places were, but she could recite The Lord's Prayer and not miss a word. She was loved and will be missed by all. Visitation will be held Saturday, August 17, 2019 from 11a.m. until 12p.m. at Holder-Wells Funeral Home, 4007 Main St., Moss Point, MS. Funeral Service will follow at 12p.m. in the funeral home chapel with Fr. Tony Arguelles officiating. Interment will be at Serene Memorial Gardens, 12800 Hwy 613, Moss Point, MS 39562. Holder-Wells Funeral Home is in charge of arrangements.

Claire Audrey Grimme, 93, of Pascagoula, MS, passed away on Tuesday, August 13, 2019, at The Sanctuary House in Moss Point. Claire was born in New Orleans, LA, on May 29, 1926. Straight out of high school, she went to work for the FBI as a... View Obituary & Service Information

The family of Claire Audrey Grimme created this Life Tributes page to make it easy to share your memories.

Claire Audrey Grimme, 93, of Pascagoula, MS, passed away on Tuesday,...

Send flowers to the Grimme family.