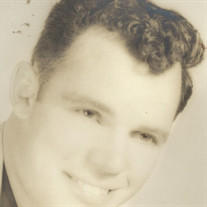 Claude Douglas Bosarge (August 29, 1935 – April 12, 2018) Claude Douglas Bosarge, age 82, passed away April 12, 2018, following an extended illness. Douglas was born on August 29, 1935, in Pascagoula, MS, to Bertie Lee Dickerson and Claude Raymond Bosarge. He worked in the family seafood business on Market St., from childhood. At 15, he would drive a dump truck to Bay St. Louis to pick up a load of fresh oysters, bring them back to the shop, unload and then go to school. After graduating from Pascagoula High School, he was awarded a football scholarship and went to the Perkinston Campus. One of his biggest disappointments in life was suffering a leg injury that ended his football career. He left college and worked at Ingalls Shipbuilding for a year. Douglas joined the U.S. Army and served in the Army National Guard for about 10 years. He was sent to Fort Rucker, AL for training and specialized in explosives demolition. While serving our Country, he was also employed with the Thiokol Chemical Corporation Family, where he made life-long friendships with his fellow employees and their families. He worked in the maintenance department for 42 years, and retired in 1996. Douglas met the love of his life, Gail King, in 1955, and they were married March 14, 1958. They were blessed with four children, five grandchildren and five great grandchildren, with another one on the way. Last month was their 60th Wedding Anniversary. Douglas loved to spend his time off from work in his boat at the islands or fishing and watching football. He was such a great role model. Because of him, each of his children developed strong work ethics and a love of being on the water. He was so proud of each of his grandchildren and great-grandchildren. They have brought so much light and joy to his life, especially in the past few years. He never met a stranger and was known for his colorful personality. He loved being the center-of-attention and was always the life of the party. Prior to his 2 ½ month illness, Douglas was living in his water-front condo in Gulf Park Estates, enjoying family, friends, nature and the simple things in life. This week, he has been described by so many as kind, compassionate, sweet, handsome, funny, favorite Uncle, like a Dad, hard-working, a gentleman and truly amazing. He will be missed by so many friends and relatives. Douglas was preceded in death by his parents, Claude and Bertie Lee; his wife of 43 years, Dorothy Gail King Bosarge; two sons, Bruce Douglas Bosarge and Brad Steven Bosarge; one brother, Jerry Eley Bosarge; one sister, Elaine Bosarge George; a sister-in-law, Marjorie Easterwood Corn; two brother-in-laws, Johnny Stringfellow and William H. (Bill) Martin, Jr., two nephews, W. H. Martin, III. and Keith E. Martin. Douglas is survived by a daughter, Melanie Gail Bosarge of Ocean Springs; a son, Brandon King Bosarge and his wife Kimberly of Gautier; three sisters, Maureen Stringfellow of Gautier, Wanda Martin of Pascagoula and Sandra Johnson and her husband Larry of Pascagoula; three granddaughters, Brooke Goff and her husband Scott of Hurley, Madison Bosarge of Oxford, and Mallory Bosarge of Gautier; two grandsons, Bruce Bosarge and his wife Amanda of Hurley and Blake Bosarge of Gautier; five great-grandchildren, Chloe and Kaylee Goff of Hurley, Faith, Eden Rose and Benaiah Bosarge of Hurley; three nieces, Dixie Saksa, Alison Bosarge-Tillman and Terri Stringfellow Dutton; nephews, David George, Shannon George, Randy Bosarge, Bart Bosarge, Tim Stringfellow and Caylum Johnson; and numerous other relatives, as well as many dear friends. The visitation for Mr. Bosarge will be Monday April 16,2018 from 12:00pm to 2:00 pm at Holder-Wells Funeral Home 4007 Main St. Moss Point, MS.The funeral service will begin at 2:00 pm from the funeral home chapel.Burial will follow in Jackson County Memorial Park in Pascagoula. Pallbearers are Johnny Template, Bobby Seal, Billy Perkins, Darryl Jackson, Artie Scholtes and Keith Delcambre. You may sign the online register book and send condolences for Mr. Bosarge at www.holderwellsfuneralhome.com Holder-Wells Funeral Home in Moss Point, MS is in charge of the arrangements.

The family of Mr. Claude Douglas Bosarge created this Life Tributes page to make it easy to share your memories.

Send flowers to the Bosarge family.