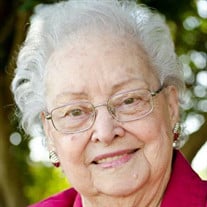 Daisy Virginia Reynolds Hill passed away on January 21, 2019 at the age of 97 after a long and very healthy life. Virginia was born May 31, 1921 in Decatur, MS. She graduated in 1938 from Union High School in Union, MS. Virginia played basketball for Union High School (coached by her father, Rudolph Reynolds) and later for East Central Junior College. She loved basketball, both as a participant and a spectator. Virginia moved to Moss Point with her parents and brother where she met and married Milton (Mickey) Hill. Virginia and Mickey were married and made Moss Point their home for over 52 years before he passed away in 1994. During her life, Virginia prioritized family and faith. She and Mickey were members of St. Joseph Catholic Church in Moss Point where they served in various areas for many years. They also served together with the local chapter of the Veterans of Foreign War. She and Mickey were avid fans and supporters of the athletic programs at Spring Hill College in Mobile, AL where their oldest and youngest sons, Jim and Walter, attended. Virginia lived a life of joyful service because that is who she was and that is the life she chose. She lived with and cared for her mother-in-law, then her parents, and, of course, her husband. Virginia (Nama) showered her children, grandchildren, great grandchildren, and great-great grandchildren with love, wisdom, food, hugs, kisses, and lots of special attention. After Mickey passed away, Virginia made her home in Pascagoula with her son and daughter-in-law Burt and Judy Hill. However, Virginia “made the rounds” where all her children lived and spent weeks or months at a time in Ocean Springs, MS; Vicksburg, MS; Starkville, MS; Dothan, AL; New Orleans, LA, and Austin, TX. In many ways, she was fearless. In her lifetime, she experienced the tragedies of Pearl Harbor, 9/11, several wars, multiple hurricanes, and devastating personal loss. But her faith was strong and she persevered while maintaining her joy of life. She welcomed everyone with open arms and loved meeting and making new friends. She was ecstatic with each new marriage and birth in her family and was proud to let everyone know how old she was, how many descendants she had, and what new feats they had accomplished. She loved celebrating and her family loved celebrating her, holding big celebrations for her 75th, 80th, 90th, and 95th birthdays. Had she made 100, the celebration would have been legendary! Virginia enjoyed reading, watching sports and game shows, cooking, and eating! She loved watching and cheering for the New Orleans Saints, Atlanta Braves, San Antonio Spurs, Notre Dame Irish, and Mississippi State Bulldogs! She had a particular fondness for women’s basketball, both college and professional. She was a huge fan of the Price is Right, Wheel of Fortune, Regis and Kathie Lee, Regis and Kelly, Kelly and Michael, & finally Kelly and Ryan! Her favorite dishes were fried chicken, tomato sandwiches, molasses cookies, bread pudding and anything served at Seafood Heaven (our family nickname for Burt and Judy’s). Last, but certainly not least, Virginia’s signature color was RED and she always sported red lipstick and red fingernails. Virginia (Nama) Hill will be deeply missed, but she has made a positive impact both deep and wide on multiple generations and all who have known her are blessed indeed. Visitation will be held at Sacred Heart Catholic Church, Pascagoula, MS on Friday, January 25, 2019 from 10:00 am to 12:00 pm Father Lalo Torres will preside over the Mass of Christian Burial beginning at 12:00 pm. The eulogy will be delivered by her grandson Mitchell James East, Pastor of University Avenue Church of Christ, Austin, Texas. Burial will follow in Machpelah cemetery in Pascagoula. Virginia was preceded in death by her parents Mr. and Mrs. A. R. Reynolds, her brother W. A. (Dub) Reynolds, her husband Milton White (Mickey) Hill on January 25, 1994, a son Dr. James Milton Hill on October 8, 2013 and a daughter Janis Carol Hill on January 25, 1960. Virginia is survived by three sons and daughters-in-law: Burton Lee Hill (Judy) of Pascagoula, MS; Donald Edward Hill (Penny) of Ocean Springs, MS; Walter Clinton Hill (Melanie) of Dothan, AL; two daughters and sons-in law: Mary Elizabeth Hill Hallberg (Walter III) of Vicksburg, MS; Georgine Hill East (Ray) of Austin, TX; daughter-in-law: Barbara McLeod Hill of Austin, TX; 15 grandchildren, 31 great grandchildren, 4 great, great grandchildren, and many extended family members. Pallbearers for the service will be Alan Lee Hill, Christopher Edward Hill, Walter Brehm Hallberg IV, Eric Alan Hallberg, Bradley Raymond East, Garrett Matthew East, Daniel Edward Hill, Dylan Everett Hill, and Rick Hutcherson. Honorary Pallbearers are Dalton Emerson Hill, Jon Reynolds, David Kilbern, Mark Frederic, Doug Brown, and Gentry Williams. You may sign the online register book and send condolences to the Hill family at www.holderwellsfuneralhome.com Holder-Wells Funeral Home 4007 Main Street Moss Point, MS 39563 is in charge of the arrangements.

Daisy Virginia Reynolds Hill passed away on January 21, 2019 at the age of 97 after a long and very healthy life. Virginia was born May 31, 1921 in Decatur, MS. She graduated in 1938 from Union High School in Union, MS. Virginia played basketball... View Obituary & Service Information

The family of Mrs. Daisy Virginia Hill created this Life Tributes page to make it easy to share your memories.

Send flowers to the Hill family.