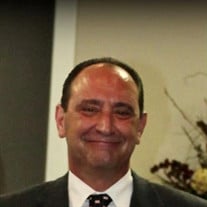 Daniel Dale Shepherd, Master Chief Hospital Corpsman, HMCM (SW) U.S. Navy (Retired) ascended to Heaven on Sunday, March 14, 2021. Master Chief (RET) Daniel Shepherd was born November 9, 1962 and hailed from Detroit, Michigan. He enlisted in the United States Navy in 1981 and completed Basic and Hospital Corpsman Training Recruit Center Great Lakes, IL. Daniel served his country with distinction for 20 years. Ashore and overseas, he served at various Military hospitals, aboard ships and on helicopters as a Marine Corps Medical Corpsman where he received the nickname “Doc”. He loved the Navy and volunteered for everything, everywhere. He was nominated to become the Command Master Chief of the Navy before retiring in 2001. His personal decorations include Sea Service Deployment Ribbon (3), Navy & Marine Corps Overseas Service Ribbon (2), Good Conduct Award (5), Meritorious Unit Commendation, Antarctic Service Medal, Southwest Asia Service Medal, Navy commendation Medal (3), Navy “E” Ribbon (2). After retiring from the Navy, Daniel returned to MS with his wife, Tanya Carlson Shepherd whom he met in 1997 during a short deployment visit by his last ship USS Princeton, CG 59. He was hired by Singing River Health System as the System Privacy Officer in 2002 – 2007. In 2008, Daniel served as the Executive Director of Singing River Health System Foundation until he retired in 2015. He was well respected and known for his big heart and generosity by all. Daniel always had a smile and kind hello for anyone he encountered. He spent much of his time volunteering and served on the Board of Volunteers in Medicine (VIM) Gautier, MS and Bethesda Free Clinic Ocean Springs, MS. Daniel was a devoted and loving husband to his wife of 23 years, Tanya Carlson Shepherd whom when they met, fell in love instantly. He was a loving Step-father to Jennifer Carlson and Grandpa to Adalyne Grace Jenkins. “Addy Graces” as he called her was his heart. He will be greatly missed by his mother Judith (Frank) Pongracz, two brothers Stephen (Sue) and David (Nicole) Shepherd, one sister Sheryl LaVerge, three furry companions, Sophie, Gia & Lola, and numerous nieces and nephews. Daniel was preceded in death by his father, Dale Shepherd and sister, Janet Shepherd. A Celebration of Life service will take place from 2:00 to 3:00 pm, Sunday, May 2, 2021 at Holder Wells Funeral Home,4007 Main Street Moss Point, MS with the service starting at 3:00 pm from the funeral home chapel. A Military Committal is scheduled at 10:00 am, Monday May 3, 2021 at the VA Biloxi National Cemetery. In lieu of flowers, donations can be made to the Southeastern Guide Dogs www.guidedogs.org OR the Wounded Warrior Project (WWP) at [email protected]" title="Click to open in a new window or tab" target="_blank" rel="nofollow noopener">[email protected] You may sign the online register book and send condolences to the family at www.holderwellsfuneralhome.com Holder-Wells Funeral Home in Moss Point, MS is in charge of the arrangements.

The family of Mr. Daniel Dale "Dan" Shepherd created this Life Tributes page to make it easy to share your memories.

Send flowers to the Shepherd family.