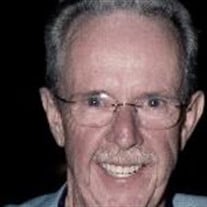 Daniel Webster Starling Jr. born 7/27/1941 in Raeford, North Carolina. Father of Daniel W Starling III (Kim) and Debbie Hosmer (Eric). Dan met his wife Barbara in January of 1999. Dan loved to tell others of how he met Barb in Mobile, AL. One day in January of 1999 Barb walked into the furniture store that he managed, looking for a baker's rack wearing chick jeans and cowgirl boots and no wedding rings. (He was very observant). He told her the racks were in the back of the store and she walked in front of him as he observed. He did not have the type of rack she needed so he told her he had 4 other stores and would see if he could find what she needed, so asked for her phone number. Needless to say, they talked more than bakers’ racks on the phone. They were married in 1999 and in 2001 after careful study of the Bible he became one of Jehovah's Witnesses. When Dan married Barbara he inherited her three sons John, Rick (Juanita) and Todd, along with grandchildren, Barry (Jackie), John V, Kelli, Sean, Amy , Kaci, Rikki, Travis and Carter, Josh, Brooke and Emily and Barbara inherited grandchildren Daniel Patrick, John Michael, Alyssa and Aaron. Not only the grandchildren but along came the great grandchildren Savanah, Ellis, Mitchell, Jennifer, Nicole and Alana Grace. Dan and Barbara moved from Mobile, Alabama to Ft. Myers, FL in 2002 after Dan had a stroke to be near family. They left many dear friends in Ft. Myers to move closer to family of children, grandchildren and great grandchildren in Pascagoula, MS. in December of 2017. It was a tearful move to Pascagoula but were embraced by the congregation of Jehovah’s Witnesses in Pascagoula and it soon felt like home. Dan loved to make seafood gumbo and his famous baked beans. He loved his 1996 Ford truck and Alabama football. (Barbara often said he loved that truck more than her). Dan loved his job as the literature servant at the Kingdom Hall wanting to please Jehovah and help the friends. Dan leaves many cherished friends, nieces and nephews. He also leaves his precious friends Tom and Beverly Holtz, Pam and Ron Edwards who are a sister and brother that he never had and surrogate daughter Jennifer and her husband Al Brimm. Visitation will be Saturday October 5,2019 from 10:00 am to 11:00 am at the Kingdom Hall of Jevohah Witness in Pascagoula . A celebration of life service in his honor will begin at 11:00am. You may sign the online register book and send condolences to the Starling family at www.holderwellsfuneralhome.com Holder-Well Funeral Home 4007 Main Street Moss Point, MS 39563 is in charge of the arrangements.

The family of Mr. Daniel Webster Starling Jr. created this Life Tributes page to make it easy to share your memories.

Send flowers to the Starling family.