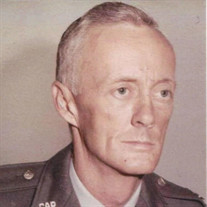 David Penman Caldwell, born on May 23, 1929, went to his heavenly home on April 9, 2021 surrounded by his family. David was preceded in death by his parents David "Scotty" Penman Caldwell, from Glasgow Scotland, his mother Maggie Haynes Caldwell, and his wife of 68 years, Ottis Cutter Caldwell. He is survived by three daughters, Ruth Caldwell Ely (Jack) of Lucedale, Dianne Caldwell Ray (Paul) of Helena, Shanna Caldwell Thompson (Jack) of Ooltewah, Tennessee, four sons; David Steven Caldwell (Eloise) of Erath, Louisiana, Robert "Bobby" Caldwell (Regina) of Pascagoula, Mike Caldwell (Robin) of Biloxi, and Scott Caldwell and Tiffany. He was a loving grandfather to 19 grandchildren, Pawpaw to 37 great grands, Uncle David to nieces, nephews, numerous cousins from S.C., and friends. He loved life, being around his family, and he enjoyed going dancing. During his lifetime he was active in the Civil Air Patrol, in the sixties to the late 70's as a Group Commander in Jackson County, and being in the Sheriff's auxillary, as a deputy. He worked in nuclear power at Ingalls for 25 years, Bechtel for seven years, and as a security guard for the Mississippi Press for a couple of years. Growing up he was a part of the Salvation Army and in their band in Georgia and South Carolina. He was in the Army National Guard, South Carolina Unit, ranked as a Sergeant in 1948. Funeral services will be held on Wednesday, April 14, 2021, at Coastal Funeral Home, 12800 Highway 613, Moss Point, MS, 39563. The family will receive friends starting at 11 AM, with the Funeral Service to begin at 12 PM, in the Chapel of Coastal Funeral Home, with Major Bradley Caldwell of the Salvation Army officiating. Interment will follow at Serene Memorial Gardens, next to the funeral home. Pallbearers will be his grandsons, Matthew Ely, Jack Thompson, Kenny Hamilton, Dustin Caldwell, Timmy Caldwell, and Cobey Ray. Honorary pallbearers will be Scott Ray, Tony Ray, Jacob Goff, Chad Caldwell, Shane Caldwell, Ricky Caldwell, and Brian Caldwell.

David Penman Caldwell, born on May 23, 1929, went to his heavenly home on April 9, 2021 surrounded by his family. David was preceded in death by his parents David "Scotty" Penman Caldwell, from Glasgow Scotland, his mother Maggie Haynes Caldwell,... View Obituary & Service Information

The family of David Penman Caldwell created this Life Tributes page to make it easy to share your memories.

Send flowers to the Caldwell family.