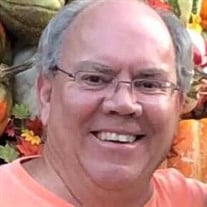 David Emmett “Dave” Griffin passed away on Thursday, October 10, 2019. His beautiful soul and spirit were born in Pascagoula, MS on April 27, 1953 as the oldest child of Kathryn (Kitty) and the late Willie O (Bill) Griffin. As a child Dave moved around, as his father was in the Air Force, but came back as a young adult to make the MS Gulf Coast his home for over 50 years. A man of integrity, amazing words, and admired by so many was also a man of tremendous skill. A true craftsmen, Dave, ultimately made his career as a well-respected electrician & engineer in the maritime industry for over 44 years. And as a business owner for more than 12 of those years he took great pride in being able to help provide for so many families. His cheerful spirit and optimism were truly infectious. When Dave wasn’t working, which was rare, he loved to entertain and be the life of the party. He also loved his New Orleans Saints through thick & thin, and there weren’t too many Atlanta Braves games he didn’t follow pitch by pitch. Over the years some of his proudest times were those spent coaching his boys in sports & watching his daughter throughout her dance career. To say he was a proud father is a true understatement. Dave’s unwavered loyalty to his faith was also well known. As an active and dedicated member of Holy Spirit Catholic Church in Vancleave, MS he was President of the Parrish Council, a member of the RCIA Team, a regular Lector and Eucharistic Minister, and was proud to have been a past King of the annual Holy Spirit carnival ball. He was also a member of the Evangelization Group with the Diocese of Biloxi as well as the Knights of Columbus Father Denis J Harlow CO 15155. He always cherished his weekly meetings with his Ripples of Grace prayer group family, whom he loved and cared for deeply. No one was quicker than Dave to lend a helping hand to anyone who needed it. His strong faith, generosity, and selflessness were some of his greatest qualities. But by far there was nothing more important to Dave than his family. Starting with his best friend, soulmate, and life partner of 43 wonderful years, Julie. From the pizza they shared during their 1st date on February 18, 1975 to his final breath, they worshiped each other and were always a very romantic and loving couple. Whether they were leaving love notes for one another in lipstick on the mirrors, enjoying a cup of coffee on the front porch, or simply sharing a song in the car, Dave and Julie’s love for one another was and will always be for eternity. And as a loving father and “Poppa” to his grandchildren his family was his greatest achievement. He was always so proud to let everyone know his children and grandchildren were his world. From talking sports with his boys to having lunch with grandkids on grandparent’s day or seeing how they did during their pop warner football game to taking his daily FaceTime call from “Poppas little girl”, he never missed an opportunity to support and love his family. Dave was preceded in death by his infant daughter, Lacey Miranda Griffin; his father Willie O (Bill) Griffin & his beloved Aunt Loni & Uncle Mac McGinty. He is survived by his devoted & loving wife, Julie Lanell Bosarge Griffin (Vancleave, MS); five children: Joshua David Griffin (Kelly, Pascagoula, MS), Shanna Lanell Dow (William, Norfolk, VA), Jordan Timothy Griffin (Boulder, CO), Blake Alexander Griffin (Vancleave, MS), and Derrick Andrew Griffin (Vancleave, MS); (4) grandchildren: Farrah Mickael Griffin, Greta Rose Griffin, Hunter William Dow, and Willow Grace Dow; mother Kathryn (Kitty) Krebs Griffin; siblings: Mary (Herbie) Wilson, Dennis (Jan) Griffin, and Nancy Scott; aunt Lorraine (Cookie) Krebs and numerous cousins, nieces, nephews, and countless friends. Visitation will be held at Holder-Wells Funeral Home in Moss Point, MS from 5:00 – 8:00pm on Tuesday October 15, 2019. A funeral/mass service will be held at 11:00am on Wednesday October 16, 2019 at Holy Spirit Catholic Church in Vancleave, MS. Interment will follow at Machpelah Cemetery in Pascagoula, MS. In lieu of flowers the family kindly request a donation to St Jude’s Hospital. This is what Dave would’ve wanted given his love for all children and his extreme gratitude for being blessed with his healthy children.

The family of David E. Griffin created this Life Tributes page to make it easy to share your memories.

Send flowers to the Griffin family.