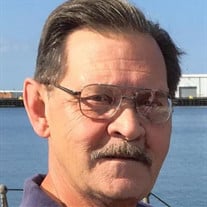 David Warren McCain, age 73, of Moss Point passed away Wednesday, December 4, 2019 in the comfort of his home with his family surrounding him. He was born September 3, 1946 in Greenville, MS to Col. Paul B. and Janie McCain. He enjoyed telling stories of traveling the world with his family during his childhood and living in places such as Japan, France, and Germany. He graduated in 1966 from Granby High School in Norfolk, Virginia and then went on to Holmes Junior College. He served three years in the US Army before working at Ingalls Shipbuilding for 32 years. He retired from Ingalls in 2002 and enjoyed 17 years of retirement sailing on the Gulf, reenacting the Civil War, and tinkering around in his garage. One of Dave's loves was antique cars, specifically his 1938 Chevrolet pick up truck. He was a member of Singing River Street Rod Association where he served as President 1985-86. He loved a good car show and looked forward to Cruisin' the Coast as he loved to show off his own hot rods. He could fix anything, was a master of almost every skill, and firmly believed that a story worth telling was worth exaggerating. Dave was predeceased by his parents, Col. Paul B. and Janie McCain, and sister Julia McCain Carter. Left to cherish his memory are his Forever, Stevie, his daughters Abby (Jonathan) Browne, Emily (Billy) Higdon, and Abby Tilley; his son Colby Breland; his best friend and identical twin Don (Rose) McCain, sister Marie McCain and 9 grandchildren Maddy, Stephen, Jonas, Grace, Claire, William, Evan, Azlynn, and Owen. A celebration of Dave's life will be held at 3200 Dantzler St., Moss Point from 2:00-4:00 on December 7, 2019. In lieu of lowers, the family requests that you donate to a charity of your choice in Dave's name. We would also like to extend our sincere gratitude to the staff at Singing River Cancer Center and Singing River Hospice of Light. You may sign the online register book and send condolences to the McCain family at www.holderwellsfuneralhome.com Holder-Wells Funeral Home, 4007 Main St., Moss Point, MS., is in charge of arrangements.

David Warren McCain, age 73, of Moss Point passed away Wednesday, December 4, 2019 in the comfort of his home with his family surrounding him. He was born September 3, 1946 in Greenville, MS to Col. Paul B. and Janie McCain. He enjoyed telling... View Obituary & Service Information

The family of David Warren McCain created this Life Tributes page to make it easy to share your memories.

Send flowers to the McCain family.