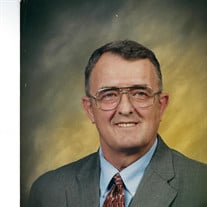 Mr. David Erskine Smith, 77, and a resident of Moss Point, MS., died peacefully Friday, April 23, 2021, at his home surrounded by his loving wife and family. He was the son of the late Thomas Smith and Irene Smallwood Smith of Scotland. Mr. Smith was born June 7, 1943, in Glen Luce, Scotland. At the age of 28, he moved to America and began his 36-year career at Ingalls Shipbuilding in Pascagoula, MS. He received many awards during his employment. He served with the Scottish Army with dedication and pride. Because of his great love for America, in 1986 he became a U.S. Citizen. He was an active member of the Dantzler Memorial United Methodist Church, where he served on the Board of Trustees, active in the Agape Sunday School Class, and Chairman of The United Methodist Men's Breakfast. He was respected by many who knew him for his positive attitude while facing many health problems. He will be greatly missed! In addition to his parents, Mr.Smith was preceded in death by one brother, Bill Smith, two step-sons, Ronald and Donald Martin, and one grandson, Neal Reed. He is survived by his loving wife of 40 years, Starler Faye Spivey Smith, step-sons, Daniel (Tonya) Walker, and David Walker, one step-daughter, Cathy (Gorden) Reed, 8 grandchildren, and 5 great-grandchildren, special sister-in-law, Peggy Spivey (Jim) Harris, his childhood friend from Scotland, Jock McCartney, and furry friend, Teddy. A Memorial Service will be held Saturday, May 22, 2021, at 11:00 a.m. at Dantzler Memorial United Methodist Church with Rev. David Huffman and Rev. David Greer officiating. Visitation will begin at 10:00 a.m. until service time. In lieu of flowers, memorial contributions may be made to Dantzler Memorial United Methodist Church or The Kidney Foundation at www.kidney.org The family would like to thank Hospice of Light for their loving care and kindness shown during the past few weeks. Holder-Wells Funeral Home, 4007 Main St., Moss Point, MS, is in charge of arrangements.

Mr. David Erskine Smith, 77, and a resident of Moss Point, MS., died peacefully Friday, April 23, 2021, at his home surrounded by his loving wife and family. He was the son of the late Thomas Smith and Irene Smallwood Smith of Scotland. Mr.... View Obituary & Service Information

The family of Mr. David E Smith created this Life Tributes page to make it easy to share your memories.