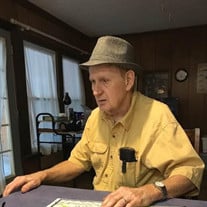 Donovan Lewis Leuba was born October 20, 1942 in Moss Point, Mississippi. He graduated from Moss Point High School in 1961. He attended junior college in Mississippi and graduated from the University of Southern Mississippi with degrees in Chemistry and German. For many years, Donovan was employed as a pharmaceutical representative. He traveled extensively within the Southern states and often stated He probably drove over a million miles in his work. He also taught computer science, math and general science in New Orleans middle school. He drove a school bus, both in high school and later in life after retirement. Donovan was active in the Boy Scouts in high school. He and his troop traveled to Horn Island for a survival test, as well as traveling to California on a Scout sponsored trip. He always enjoyed the Scout reunions held each year. He was active in the Toastmasters Speaking Clubs, both here and in Texas. He joined when he began selling, to give himself the confidence to speak to strangers and present his products with ease. He enjoyed fishing, camping and most any outdoor activities. He played pool for most of his life and was a consistently high level player. He enjoyed learning, spoke both German and Spanish and had a large library. He was skilled with his hands and very creative with projects, having once built a pool table from scratch for the neighborhood players. He loved all animals, especially dogs. Donovan married his wife, Portia Smart Leuba in 2000. The couple spent most of their married life in Texas. He and his wife had recently moved back to this area. Survivors include his wife, Portia; his brother George Leuba, of Atlanta, Texas; sister, Peggy Grierson of Escatawpa, Mississippi; sister Dorothy Leuba of Pascagoula, Mississippi, and two sons, David Thoreau Leuba of Picayune, Mississippi and Will Faulkner Leuba of Slidell, Louisiana, as well as nieces and nephews and grandchildren. Donovan was an original 'out of the box' thinker. His motto was: "Those who say something is impossible should not get in the way of someone doing the impossible." He was greatly loved by his family and was his wife's best friend. Visitation will be Saturday March 9, 2019 from 10:00 am to 11:00 am at Holder-Wells Funeral Home 4007 Main Street Moss Point, MS. A celebration of life service in his honor will begin at 11:00 am from the funeral home chapel.In lieu of flowers, please donate to animal rescue or your local animal shelter. Holder-Wells Funeral Home, Moss Point, Mississippi is in charge of arrangements.

The family of Mr. Donovan Lewis Leuba created this Life Tributes page to make it easy to share your memories.

Send flowers to the Leuba family.