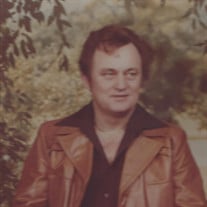 Mr. Douglas Mandle Perez 81, of Pascagoula, MS was promoted into heaven on March 7,2020. Mr. Perez was born on September 19,1938 in Mobile, AL to Lewis and Ethel Perez and lived in Pascagoula for most of his life. He was affectionally known as “Old Blue Eyes” He took great pride in being a Captain for the Pascagoula Fire Department and owning his business Perez Electric. He loved the muddy Mississippi and was inspired by his beginnings on the riverbanks of the Pascagoula River. The sound of the water and the sun dancing on the waves became music to his ears. He had his own special sound on the guitar and was well known for that sound and the slide of his steel guitar. He loved his wife of sixty-four years Shirley Bowie Perez. His greatest accomplishment was his family. He was a loving husband and devoted father. His greatest joy was his children and the loss of Lewis (Little L) was sometimes unbearable. He believed that God always finds you when you are lost. Doug once said before he found God, he used to find lots of trouble. He had friends some in high and some low places.He said he shared his light with each and everyone. And now he is with his Lord. He is preceded in death by his precious boy Lewis (Little Luke) Perez,his parents Lewis and Ethel Perez, his brothers Bobby Lewis and Vincent Perez. He is survived by his wife Shirley Bowie Perez, his son Douglas Perez Jr.; his daughter Tina (Robert) Stringfellow all of Pascagoula, his sisters Delores Woodridge of Louisville Kentucky, Joyce Brooks of Moss Point, and his sister-in-law Ms. Ruby Jones of Livingston, LA. He will also be sadly missed by his four loving and devoted grandchildren, seven great grandchildren, and numerous nephews and other relatives. Visitation will be Saturday March 14, 2020 from 10:00 am to 12:00 pm at Holder-Wells Funeral Home 4007 Main Street Moss Point, MS 39563. The funeral service will begin at 12:00 pm from the funeral home chapel. Brother Rodger Bradley, Brother Eugene Eubanks and Bishop Tregnel Thomas will be officiating. Burial will follow in Griffin cemetery in Moss Point with honorary burial rites being conducted by the Pascagoula Fire Department. You may sign the online register book and send condolences to the Perez family at www.holderwellsfuneralhome.com Holder-Wells Funeral Home in Moss Point, Mississippi is charge of the arrangements.

Mr. Douglas Mandle Perez 81, of Pascagoula, MS was promoted into heaven on March 7,2020. Mr. Perez was born on September 19,1938 in Mobile, AL to Lewis and Ethel Perez and lived in Pascagoula for most of his life. He was affectionally known... View Obituary & Service Information

The family of Mr. Douglas Perez Sr. created this Life Tributes page to make it easy to share your memories.

Mr. Douglas Mandle Perez 81, of Pascagoula, MS was promoted into...

Send flowers to the Perez family.