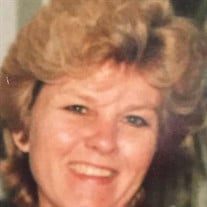 In the early morning hours on Tuesday,February 16,2022, Elaine Blades Odom, 80, of Moss Point, MS, passed away peacefully at her home after a year long battle with pancreatic cancer. Born on July 11, 1941 in Moss Point, MS to Thames Virgil (Tim or T.V.) Blades and Hazel Seidenspinner Blades. She attended and graduated from Moss Point High School in 1959 as a Class Beauty. In October 1960 she married William Henry Odom. They settled in Moss Point to raise their family. As the granddaughter of a minister, she had a deep faith in God and a love for her church, and made sure that her children did as well. She led by glowing example of her love for God. She was a loyal and dedicated daughter, sister, mother, grandmother and friend. Her love of her family and friends ran deep, and her friends numbered many throughout her life. Elaine was preceded in death by her parents, Thames Virgil (Tim or T.V.)Blades and Hazel Seidenspinner Blades, and her loving husband, William Henry Odom. She is survived by her two brothers, Joe D. (Sherry) Blades and David (Mae) Blades, both of Moss Point, her sister-in-law, Ruby Odom Lashley of Century, Florida, and brother-in-law, Horace (Connie) Odom of Moss Point. She is also survived by her children, Donna (Julius) Bosco of Pascagoula, Tim Odom of Moss Point, Sonja Robison of Ocean Springs, and Brian Odom of Pascagoula. Grandchildren are Julius (Kayla) Bosco, III, Nick (Haley) Bosco, both of Pascagoula, Katie Odom and T.J. Odom, both of Port St. Joe, Florida, Jessica Thomas of Moss Point, Zach Thomas of Vancleave, Spencer Thomas of Moss Point, Mary Kate Robison of Ocean Springs, Jeremy Odom and Miranda Odom, both of Moss Point. She also leaves behind 15 great grandchildren, along with numerous nieces and nephews, and many other beloved family members. The family would like to thank Dr. Techkshell Washington and the Singing River Oncology staff, as well as Dr. Lisa Bond and the Hospice of Light staff for their wonderful care. Elaine’s kindness, deep loyalty and loving nature will be missed immensely by all of her family and friends. Services will be held on Tuesday, February 22, 2022 at First Baptist Church, SBC Moss Point as follows: Visitation from 11:00 am until 12:00 pm with a celebration of life service in Elaine’s beginning at 12:00 noon. In lieu of flowers, the family asks that donations be made to: First Baptist Church SBC Moss Point 4807 Main Street Moss Point, MS 39563. You may view the online register book and send condolences to the family at www.holderwellsfuneralhome.com Holder-Wells Funeral Home 4007 Main Street Moss Point, MS 39563 is in charge of the arrangements.

In the early morning hours on Tuesday,February 16,2022, Elaine Blades Odom, 80, of Moss Point, MS, passed away peacefully at her home after a year long battle with pancreatic cancer. Born on July 11, 1941 in Moss Point, MS to Thames Virgil (Tim... View Obituary & Service Information

The family of Mrs. Elaine Blades Odom created this Life Tributes page to make it easy to share your memories.

Send flowers to the Odom family.