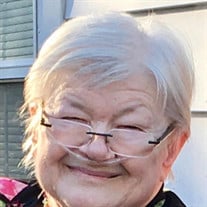 Elizabeth Joanne Byrd March 10, 1942 - September 21, 2018 Joanne passed from this life on Friday, September 21, 2018. She was proceeded in death by her parents, Ora and Naomi Owens as well as two of her brothers, Bob Owens and Bud Owens. On July 26, 1955 she wed her first and only love, Robert Simmons Byrd, Jr. Together they raised five wonderful children who will always honor and cherish her memory.She is survived by her husband of 63 years, Robert S Byrd jr. as well as her brother Robert (Vassie) Owens and sister Mary (Larry) Clark, Bo (Pauline) Byrd, Stanley (Pat) Byrd, and Robert Ellis. Children are Robert ( Dana) Byrd, Ann ( Mitch) Walters, Linda ( Kirk) Alvarez, Bruce Kelly ( Kim ) Byrd and Jesse (Amanda) Byrd. Her grandchildren are Joshua (Marie) Byrd, Daniel Byrd, Caleb (Tiffany) Byrd, Matthew Byrd, Thomas Byrd, Logan Byrd, Sophie Girardeau, Brice (Angela) Walters, Brock (Krystal) Walters, Bobby (Rachel) Walters. , Bo (Rachel) Walters, Candace Frazier, Nick Helton, Evan Alvarez, Lindsay Alvarez and Zack Redmond. Joanne was also blessed with 18 great grandchildren and 5 great-great grands as well as a host of nieces and nephews. She was an active member of the Community of Christ Church as long as her health allowed. Playing the piano at church was one of her favorite memories that gave her great pride. She was just as passionate about her quilting and sewing. She enjoyed making blankets for each new grandchild . That was one special way that she let people know how much they meant to her. She had a special group of friends who supported her and visited with her until she passed. The family requests that in lieu of flowers, donations in her honor be made to Community of Christ Church in Moss Point. There will be a Celebration of life service on Saturday the 29th of September beginning at 2:00pm with the family greeting friends one hour prior to service time at the Community of Christ Church located at 4220 Dan Sherman Red., Moss Point, MS. You may sign the online register book and send condolences for Mrs. Byrd at www.holderwellsfuneralhome.com Holder-Wells Funeral Home 4007 Main St. Moss Point, MS is in charge of the arrangements.

Elizabeth Joanne Byrd March 10, 1942 - September 21, 2018 Joanne passed from this life on Friday, September 21, 2018. She was proceeded in death by her parents, Ora and Naomi Owens as well as two of her brothers, Bob Owens and Bud Owens. On... View Obituary & Service Information

The family of Mrs. Elizabeth Byrd created this Life Tributes page to make it easy to share your memories.