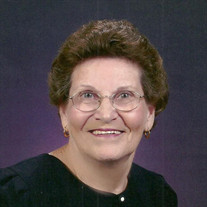 Elsie Margaret Knudsen Webb, 87, of Cokato, MN, passed away June 20 following complications of a stroke. Elsie was born September 22,1932 in Marysville, CA. She grew up in Hurley, MS and became a resident of Gautier, MS when she married Charles... View Obituary & Service Information

The family of Elsie Margaret Knudsen Webb created this Life Tributes page to make it easy to share your memories.

Send flowers to the Webb family.