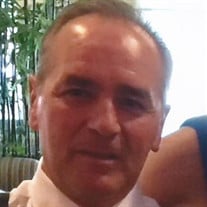 FRANCIS L. (BUBBA) TOUPS JR. Francis L. “Bubba” Toups Jr., 60 years old, went home to his Lord and savior Friday evening, July 5 th , 2019, at Wellington Regional Hospital in West Palm Beach, Florida. He was born October 11 th , 1958 in Pascagoula, MS to Francis L. (Larry) Toups Sr. and Bobbie “Toups” Voris. He was a 1976 graduate of Pascagoula High School and Northeast Louisiana State University in 1980. On September 3 rd , 1988 he married Evelyn DeLaRosa Toups in Fort Lauderdale, Florida. Bubba enjoyed a long successful management career in the roofing tile industry across Florida. At the time of his passing he was Regional Sales Manager for all of North Florida for Boral Roofing. Bubba was a follower of Jesus Christ and devoted husband and father. This was exemplified by his daily routine which included reading and sending his favorite scriptures, Philipians 4:6-7, Psalm 27:14 to his children. He loved his children, grandchildren, nieces, and nephews and was a hit during family get togethers such as Thanksgiving. He had a love for music and was known to make a mark on the dance floor. It was common to see Bubba with a game on the television as he was passionate about sports and was an avid LSU and Saints football fan. Growing up in Pascagoula, Bubba left his mark on the gridiron and diamond. He was captain of the 1971 World Series Champion Pascagoula Dixie youth baseball team and was also a member of the Pascagoula Panthers football and baseball team during his high school years. He then went on to play collegiate baseball and football setting numerous records that still hold to this day. Bubba is survived by his wife Evelyn of 31 years, his children, Summer (Jon) Garcia, Francis “Frankie” Toups and Sierra Toups. His Father Francis “Larry” Toups Sr. of Pascagoula Mississippi and his mother Bobbie “Toups” Voris of Fort Myers, Florida. His sister Nita (Tim) Shepherd of Pascagoula Mississippi and Kimberly (Robert) Mosley of Lexington Kentucky. Three grandchildren, Jackson Pierce Garcia, Sofia Neil Garcia and Siggi Lynn Garcia. He was preceded in death by his Grandparents Lolles and Nita Toups of Biloxi Mississippi and James and Esther Huggins of Hattiesburg Mississippi. A memorial service will be held Tuesday, July 23rd at Our Lady of Victories Catholic Church in Pascagoula Ms. Visitation will be held 6:00 - 6:45 p.m with Rosary and Mass immediately following. In Lieu of Flowers, the family prefers donations be sent in memory of Bubba Toups to Saint Vincent DePaul at 503 Convent Ave., Pascagoula Ms, 39567 or Dixie Youth Baseball National Office, PO Box 877, Marshall Texas 75671. Holder - Wells Funeral Home,4007 Main Street ,Moss Point , MS 39563 is in charge of arrangements.

The family of Francis L. "Bubba" Toups Jr. created this Life Tributes page to make it easy to share your memories.

Send flowers to the Toups family.