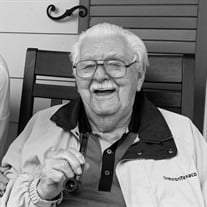 Francis Larry Toups, Sr., age 89, of Pascagoula passed away peacefully on October 13, 2020 surrounded by his daughters, Nita and Kim and friends in Ocean Springs, Mississippi. He was born on October 4, 1931 in Biloxi. He graduated High School in 1949 from Notre Dame in Biloxi. Upon graduation Larry joined the US Navy and served during the Korean conflict where he received two medals for his service to the United States Navy. After conclusion of four years in the Navy, Larry continued his education at Perkinston Junior College for two years and completed his Accounting degree at the University of Southern Mississippi in Hattiesburg. His working career included Corso’s Wholesale and later to Ingalls Shipbuilding in Pascagoula where he retired in 1989. Larry was born and lived in the Catholic Faith. Most of his outside interest included OLV Catholic Functions, Catholic charities such as St. Vincent de Paul, and spending valuable time coaching and teaching the Youth of Pascagoula in various sports activities. Larry’s commitment to the Catholic charities gained him the Lumen Christi Award for his work with Saint Vincent de Paul. As a leader within the OLV Parish, Larry and Rex Moore teamed up to successfully start the first youth programs at OLV for Pee Wee Baseball, Basketball, and Football. His contributions to the Catholic Faith, Youth and Charities within OLV were major accomplishments in his life. Larry also contributed many years to the youth in Pascagoula sports. He coached many teams in different age groups while encouraging sportsmanship, confidence, and leadership to his players often taking his teams to playoff events representing Pascagoula. In Larry’s downtime, you could find him playing golf all across the Gulf Coast with his high school buddies. He enjoyed the nature that he saw on the course as well as the exercise of walking 18 holes. He was also an avid photographer specializing in scenic photos, sport events, and bird species. Larry is preceded in death by his parents, Lolles and Nita Toups of Biloxi; sister Joanita Santanelli of Biloxi; and son Francis Larry (Bubba) Toups, Jr. of Royal Palm Beach Florida. Larry is survived by his two daughters, Nita (Tim) Shepherd of Pascagoula, and Kim (Robert) Mosely of Lexington Kentucky. Ten grandchildren and 12 Great-grandchildren and his Daughter-in-law Evelyn Toups of Royal Palm Beach Florida. One brother, Mark (Anne) Toups of Ocean Springs, and one sister Edwina (John) Wells of Ocean Springs MS and Evelyn Toups. Visitation will be Tuesday October 20,2020 from 9:30 am to 10:30 am at O.L.V. Catholic Church 503 Convent Ave. Pascagoula, MS 39567. A Mass of Christian Burial will begin at 10:30 with Father John McGrath officiating. Burial will follow at 2:30 pm at the Biloxi National Cemetery with military rights being conducted by the United States Navy. In Lieu of Flowers, please make donations to Saint Vincent de Paul P.O.Box 368, Pascagoula, MS 39568. You may sign the online register book and send condolences to the Toups family at holderwellsfuneralhome.com Holder-Wells Funeral Home 4007 Main Street Moss Point, MS 39563 is in charge of the arrangements.

Francis Larry Toups, Sr., age 89, of Pascagoula passed away peacefully on October 13, 2020 surrounded by his daughters, Nita and Kim and friends in Ocean Springs, Mississippi. He was born on October 4, 1931 in Biloxi. He graduated High School... View Obituary & Service Information

The family of Mr. Francis L. "Larry" Toups created this Life Tributes page to make it easy to share your memories.

Send flowers to the Toups family.