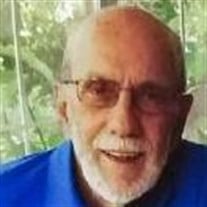 Gary Raymond Grayban, age 83, born on July 31st, 1935 in New Jersey to Gayza Grayban and Viola Malinowski Grayban went onto his heavenly home February 7th, 2019. Visitation will be held on Monday, February 11th, 2019 at Action Church, formally Oasis Church, from 12:00 - 2:00 with the ceremony immediately following. Pastor Eric Camp will be officiating. Interment will be at Griffin Street Cemetery in Moss Point with military honors. Gary graduated from Pompton Lakes High School and continued on to receive a B.S. in Physics from Fairleigh Dickinson University after serving in the Corps of Engineers in the United States Army in Germany. After meeting the love of his life at a New Years Eve party, Gary soon married his sweetheart, Dorothee “Dotty” Elizabeth Lampe on September 3, 1960 and honeymooned in Bermuda. Gary had an exceptional career in California working for Atomics International engineering some of the first nuclear reactors, Rocketdyne engineering some of the first engines for the NASA Saturn Rocket program, Hughes Aircraft, Teledyne and Litton Industries. In 1972, Gary was transferred to Mississippi to head the Shock and Vibrations team by Litton for the newly acquired shipyard, Ingalls where he worked until taking an early retirement in 1993. Gary’s true legacy was becoming a born again Christian in 1969 and dedicating the rest of his life to introducing Jesus Christ through several ministries, including Full Gospel Business Men’s Fellowship International (FGBMFI). Gary was also an ordained minister so he could pray with those in hospital ICUs. He was the leader of the prayer team and served on multiple leadership roles at Action (Oasis) Church. Gary loved the Lord with all his heart and spent the last 50 years sharing his story and the love of Jesus Christ. Gary had life long love for music along with a full life of hobbies that included working in his flower gardens, traveling, marveling at architecture, playing golf with his grandson, Bryce and working out at Health Plex. Gary is survived by his wife of 58 years, Dorothee Grayban and his children Glen Grayban (Laura Webber), Scott Grayban, Lori Grayban and Sharon Grayban Jackson (Terry Jackson); grandchildren Bryce Jackson, Avery Jackson, Brett Grayban Jackson and other family and friends. Gary is preceded in death by his brother, Eugene, baby sister Grayban, his mother and father. Along with flowers, donations may be given to the Billy Graham Evangelistic Association in Gary’s name. You may sign the online register book and send condolences to the Grayban family at www.holderwellsfuneralhome.com Holder-Wells Funeral Home 4007 Main Street Moss Point, MS is in charge of the arrangements.

The family of Mr. Gary Raymond Grayban created this Life Tributes page to make it easy to share your memories.

Send flowers to the Grayban family.