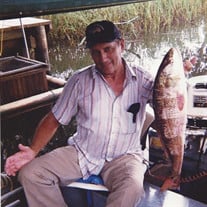 Mr. Gary Ray Lennep 82, of Moss Point, MS passed away on April 29,2019 at home surrounded by his loving and dedicated family. Gary was a lifelong resident of Moss Point, he was born on July 9, 1936 to Foster and Marie Lennep. He was manager and owner of Lennep’s Hardware for over 50 years. Gary was a very respected man in Moss Point and was a friend to everyone. He was a quiet individual and had a gentle nature about him. As many people can attest he would also lend a helping hand when needed. You could walk inside his hardware store and if you asked him for his advice on a home project, it would be the right advice. He was a member of Dantzler Memorial United Methodist Church in Moss Point. He was a member of the Young Men’s Business Club of Moss Point and was honored in 2009 with the YMBC Lifetime Community Service award. He was also a member of the Magnolia Hunting Club for many years. His day off was on Wednesdays and that day was his “fishing” day. He had many secret fishing spots in the area. He also enjoyed squirrel hunting on Black Creek. He enjoyed growing vegetables in his garden and giving away most of his crop to his family and friends. He would always make sure Lennep's Hardware sponsored Moss Point School Athletics and city festivals. But mainly Gary Lennep was a dedicated and loving father who helped raise his children to be honest, trustworthy, and treat everyone with respect. These were his traits and he did his very best to pass the traits on to his family. Along with his parents he is also preceded in death by his sister-in-law Hazel Lennep. He is survived by his brothers Elwood Lennep of Moss Point and Warren (Ann) Lennep of Moss Point, children Debbie (James) Myers of Escatawpa, Mike (June) Lennep of Escatawpa, Gary Wayne Lennep of Moss Point, and Wendy (Joey) Duggan of Ocean Springs, his companion for over 30 years Norma Welch, and the mother of his children Myrna Dennis of Moss Point. He will also be sadly missed by his grandchildren Lonnie (Melody) Boone of Spanish Fort, Ryan (Ryann) Green of Escatawpa, Brandon (Day) Lennep of Madison, Jason (Desiree) Lennep of Spanish Fort, Jeremy Lennep of Atlanta, Anna (J.T.) Tomes of Atlanta, Myles Duggan of Ocean Springs, and Mason Duggan of Ocean Springs. Great grandchildren Evan Green Johnson, Cooper Boone, Anna Kate Lennep, Foster Lennep, Easton Lennep, Norah Lennep, and Austin Lennep. Visitation will be Thursday May 2, 2019 from 9:00 am to 11:00 am at Holder-Wells Funeral Home 4007 Main Street Moss Point, MS. The funeral service will begin at 11:00 am in the funeral home chapel with Rev. David Greer and Rev. David Newton officiating. Active pallbearers will be Gary’s grandsons. Honorary pallbearers will be the members of the Young Men’s Business Club. The family would like to thank Dr. Teka Washington and all the staff in the chemo lab at the Singing River Cancer Center, Cynthia "Catfish" Hamm and Hospice of Light. The family would also like to thank all of those who provided food, comfort, and prayers throughout his illness. Gary did not lose the battle with cancer, he won because he is now in heaven with his Lord. In lieu of flowers, Gary wishes for donations to be made to Hospice of Light, Dantzler Memorial United Methodist Church, or to cancer research. You may sign the online register book for the Lennep family at www.holderwellsfuneralhome.com Holder-Wells Funeral Home in Moss Point, MS is in charge of the arrangements.

Mr. Gary Ray Lennep 82, of Moss Point, MS passed away on April 29,2019 at home surrounded by his loving and dedicated family. Gary was a lifelong resident of Moss Point, he was born on July 9, 1936 to Foster and Marie Lennep. He was manager... View Obituary & Service Information

The family of Mr. Gary Ray Lennep created this Life Tributes page to make it easy to share your memories.

Send flowers to the Lennep family.