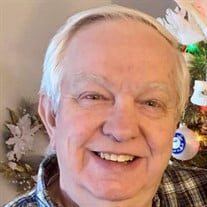 George Lester Curtis, Jr., age 66, of Casper, Wyoming, passed away with his two daughters by his side, October 23, 2021 at Wyoming Medical Center. He was born May 2, 1955 to Lester and Neva (Smith) Curtis in Pascagoula, Mississippi. He was the oldest of three children to Lester and Neva. He grew up in Grand Bay, Alabama before his family relocated to Louisiana. He graduated from Baker High School in Baker, Louisiana in 1973. After graduation, George began his electrical maintenance career and went to work for Ingalls Shipbuilding. He met and married Jane Curtis in 1976. They lived in Grand Bay, AL until the family relocated to Casper, WY in 2002 when George accepted a job with Lost Cabin Gas Plant where he “supplied America’s energy needs” as he would say. His greatest enjoyments were golfing, fishing, and taking part in the Cowboy Single Action Shooting Society. The Wyoming frontier allowed him to showcase his love for the outdoors and he was more than willing to show off the new addition to his collection of firearms. He had hoped to move back to the coast after retirement to enjoy the beach life, endless rounds of golf, fishing, and scuba diving adventures. Many memories will be cherished from the time we spent with him, and all the seafood platters and sweet tea enjoyed. George loved God and led his family by following His example. George modeled strength, integrity, and honest hard work to achieve his goals in life. He was a loving father who cared for his wife and family very well. He was a vital cog in the wheel that kept our family going. From helping with finances, taking care of the cars, even helping inflate the toys for going to Edness K, he did it all. He is survived by his mother Neva Curtis, wife of 45 years, Jane Curtis, son John (Christy) Curtis, daughter, Amy Curtis, and daughter, Leslie, grandchildren, Ayelin Curtis, Zoey Curtis, and Owen Curtis, siblings, Carl B. Curtis and Wanda (Steve) Craighead, niece Caitlin and nephew Clayton. A funeral service will be held on Wednesday November 3rd, 2021 at Holder-Wells Funeral Home at 10:00 am a visitation beginning at 9:00 am. Burial will follow in Machpelah cemetery in Pascagoula, MS. A celebration of life will be held at City Park Church in Casper, Wyoming at 11:00am on November 13, 2021. Arrangements are entrusted to the care of Bustard & Jacoby Funeral Home, 600 CY Avenue, Casper, WY 82601 and Holder-Wells Funeral Home, 4007 Main St, Moss Point, MS 39563. To send flowers to the family or plant a tree in memory of George Lester Curtis Jr., please visit our floral store.

George Lester Curtis, Jr., age 66, of Casper, Wyoming, passed away with his two daughters by his side, October 23, 2021 at Wyoming Medical Center. He was born May 2, 1955 to Lester and Neva (Smith) Curtis in Pascagoula, Mississippi. He was... View Obituary & Service Information

The family of Mr. George Curtis Jr. created this Life Tributes page to make it easy to share your memories.

Send flowers to the Curtis family.