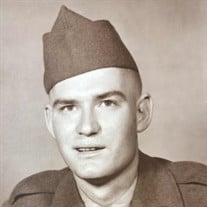 Herbert Cowart, 85 of Franklin Creek passed away on July 3, 2018 at his home. He was born on August 10, 1932 in George Co., MS. Mr. Cowart worked for International Paper Company where he retired after many years of service. He was a veteran... View Obituary & Service Information

The family of Herbert Cowart created this Life Tributes page to make it easy to share your memories.

Send flowers to the Cowart family.