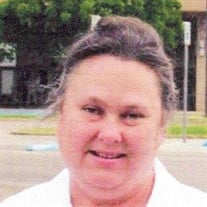 Honna Lee Parker passed away on Friday, June 4, 2021 at the age of 57. She was a Registered Nurse who has worked at Mobile Infirmary, Singing River Hospital, and most recently at Gulfport Memorial. She had a gift for serving patients with dignity, respect, and compassion. However, her most fulfilling accomlishment was being a wife, mother, and "Nana" to her three grandchildren. For Honna, family was everything! Nothing gave her greater pleasure than attending family get-togethers and numerous school or church events her son and grandchildren. She enjoyed reading, going on cruises, and spending time with her beloved dog, Rocky. Family cruises to Hawaii, Scotland, Ireland, the Bahamas were some of her most cherished memories. Honna was a member of First United Pentecostal Church of Hurley and faith played an important role throughout her life. She was preceded in death by her father, John Henry Ford, father in law, Weber F. Parker, Sr., mother in law, Betty L. Parker, brother in law, Larry Ryan Sr., nephew, Danny "Butch" Ryan, and cousin, Veronica Mosley. She is survived by her husband of 39 year, Paul G. Parker, son Paul "PJ" (Catrina) Parker, Jr., three grandchildren, Josiah Parker, Jaylen Parker, and Braylee Parker; mother, Ethel Mae "Sissy" Ford, brother Richard "Stacey" (Patsy) Ford, three sisters, Sarah Diane Ryan, Tammy Ford, and Collen Ford; and numerous nieces, nephews, and friends. A worship service will be held on Sunday, June 6, 2021, at 6 PM, with continued visitation following the service. Funeral services will be held on Monday, June 7, at 10 AM. All services and visitation will be held at First United Pentecostal Church in Hurley. Interment will follow at Serene Memorial Gardens in Escatawpa, MS. Pastor Randy Jourdan will officiate the services. Pallbearers will be Michael Parker, Christopher Smith, Matthew Taylor, Joshua Ryan, Tony Craven, and Mark Alford.

Honna Lee Parker passed away on Friday, June 4, 2021 at the age of 57. She was a Registered Nurse who has worked at Mobile Infirmary, Singing River Hospital, and most recently at Gulfport Memorial. She had a gift for serving patients with dignity,... View Obituary & Service Information

The family of Mrs. Honna Lea Parker created this Life Tributes page to make it easy to share your memories.

Send flowers to the Parker family.