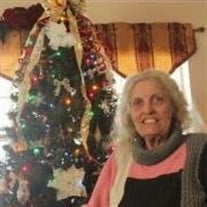 Mrs. Harvey passed away peacefully the morning of January 11, 2019 at the Johnson Family Retirement Home in Moss Point, MS. She was formerly a longtime resident of Kenner, LA and River Ridge, LA. The 84-year-old mother of two was widow of Delano F. Harvey. She was predeceased by her eldest son, Keith F. Harvey. She is survived by her other son Ronald C. Harvey and his wife Janell of Ocean Springs, MS. Her sister Jean Heinrich of Las Vegas, NV. Six grandchildren – Sabrina Burgess and her husband Frank of Denham Springs, LA; Kristopher Harvey of Baton Rouge, LA; Justin Bergeron of Tampa, FL; Ryan Harvey of Ocean Springs, MS; Hannah Swartz and her husband Mike of Gulfport, MS; and Joshua Harvey of Ocean Springs, MS. Four great-grandchildren – Victoria Landry, Doug Landry, Mallory Landry and Blake Burgess all of Denham Springs, LA. Numerous nieces and nephews and their families. Iretha was born in Concord, AR on August 8, 1934. The third child of Clarence and Mary Brock. She graduated from Judsonia High School in Judsonia AR in May 1953. She married her husband who was a high school friend on May 5, 1956 in Hernando, MS. The family moved to Kenner, LA in 1973 and to River Ridge, LA in 1980. After Hurricane Katrina in 2005, they sold the family home in River Ridge and moved back into the remodeled home in Kenner that they had lived in the 70s. Mrs. Harvey continued to live in Kenner until 2014 when health concerns led her to move in with her son in Ocean Springs, MS eventually moving into the assisted living retirement home in Moss Point, MS. Mrs. Harvey was a member of Hickory Knoll Church of Christ in Harahan, LA. She was a homemaker, a rental property manager and a business manager in her husband’s TV repair business in River Ridge, LA. She enjoyed visiting relatives in Arkansas and hosting visits with her grandchildren and great grandchildren. She was an active member in the Kenner chapter of TOPS. In retirement, she enjoyed going to garage sales with her friends and buying knick knacks for herself and her grandchildren. Memorial arrangements are in process. A celebration of life service in her honor will be Saturday February 23,2019 beginning at 12:00 pm at First Baptist Church of Ocean Springs,602 Washington Ave. Ocean Springs, MS 39564 In lieu of flowers, the family requests donations be made to the building fund for First Baptist Church, 602 Washington Ave, Ocean Springs, MS 39564 or your local church in remembrance of Mrs. Harvey. You may sign the online register book and send condolences to the Harvey family at www.holderwellsfuneralhome.com Holder-Wells Funeral Home at 4007 Main St. Moss Point, MS 39563 is incharge of the arrangements.

Mrs. Harvey passed away peacefully the morning of January 11, 2019 at the Johnson Family Retirement Home in Moss Point, MS. She was formerly a longtime resident of Kenner, LA and River Ridge, LA. The 84-year-old mother of two was widow of... View Obituary & Service Information

The family of Mrs. Iretha Harvey created this Life Tributes page to make it easy to share your memories.

Mrs. Harvey passed away peacefully the morning of January 11,...

Send flowers to the Harvey family.