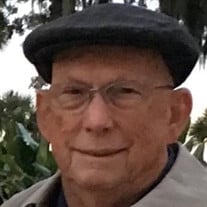 Our beloved brother Jack Rush Hicks, Sr. passed away on Sunday morning at Community Hospice in Vidalia after a short illness. Jack was born May 12, 1931 in Bibb County, GA. After spending his childhood in Georgia, his family relocated to Mississippi where he spent his formative years and graduated from Pascagoula, MS High School in 1950. He went on to serve in the military for four years during the Korean War followed by studies at Abraham Baldwin College. Jack married his high school sweetheart Janice Nelson Hicks in 1954. He and Janice moved to Statesboro, Georgia in 1969 where they raised a family and ran their own business, Hicks Office Supply. Their storybook romance lasted 43 years, until Janice lost her battle with pancreatic cancer in 1997. A year later Jack moved to Cobbtown where he married Dottie Bailey and spent the next 21 years in another amazing marriage. Jack would often happily confess how big of a blessing it was to have spent so many years with two equally wonderful women of faith. He loved working with his hands and could fix or build anything imaginable. When presented with a problem, he wouldn’t rest until he found a solution. He was also an avid golfer who continued to shoot his age well into his 80’s. Jack was also named as Happy Jack by his friends due to the upbeat and optimistic way he lived. He loved to sing and praise the LORD and always enjoyed leading others in praising His God with a grateful heart. Jack was preceded in death by his wife, Janice Nelson Hicks; parents, Coleman and Carrie Hicks and a sister, Dorothy Hicks Parker. Surviving by his wife Dottie Baily Hicks of 21 years; his daughter Margaret Hicks and his son Jack Rush Hicks, Jr. A stepson, Derek Bailey and a stepdaughter Shandra Montague and 6 grandchildren: Lewis William Hook, Thomas Colby Hook, Jack Hicks III, Chesire Rigler, Brynna Bailey and Brooke Bailey and many nieces, nephews and cousins. A graveside service will be held on Friday, November 29, 2019, at 10:30 AM, at Machpelah Cemetery in Pascagoula. The family requests that memorials be made in Mr. Hicks' name to the First United Methodist Church, 2710, Pascagoula Street, Pascagoula, Mississippi, 39567.

Our beloved brother Jack Rush Hicks, Sr. passed away on Sunday morning at Community Hospice in Vidalia after a short illness. Jack was born May 12, 1931 in Bibb County, GA. After spending his childhood in Georgia, his family relocated to Mississippi... View Obituary & Service Information

The family of Jack Rush Hicks Sr. created this Life Tributes page to make it easy to share your memories.

Send flowers to the Hicks family.