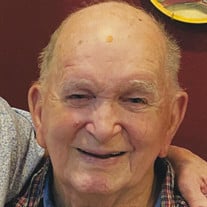 Jack Dempsey Smith, 93 years old of Wade, Mississippi passed away into the arms of the Lord on December 15,2021 with his loving family by his side. He was born on December 26,1927 in Brooklyn, Mississippi. He served his country with pride and dedication with the United States Army for 14 months, he was honorably discharged. He retired from the Jackson County Grain Elevator in Pascagoula after 30 years’ service. Mr. Smith was of the Methodist Faith. He was named after the famous boxer Jack Dempsey for whom he admired very much. He was the youngest of seven children. He loved his animals. He always fed the birds, squirrels and all the strays that would come to his home. His greatest time was spent with his family and his grandkids. He was a devoted husband, loving father, brother and the “Best Grandfather” ever. He left a legacy of family and friends who will miss him greatly. He was preceded in death by his wife Marilyn Bahr Smith, his son Christopher Smith, his parents John Pilgrim Smith and Mamie James Smith, his sisters Easter Smith Dennis and India Smith Clark, his brothers and their wives Mike (Grace) Smith, Jake (Frances) Smith and Paul (Virginia) Smith. He is survived by his two daughters Sue Smith (Doug) Howard and Karen Smith (Jeff) Ruffin. His 4 grandchildren Eddie (Tara) Howard, Shannon (Lee) Walters, Jessica Thames (Jamie) Cochran and Taylor Smith. 6 great grandchildren and 9 great great grandchildren. His sister Rosa Mae Whatley and a host of nieces, nephews and other relatives. Visitation will be Saturday December 18,2021 from 10:00 am to 11:00 am at Holder-Wells Funeral Home 4007 Main Street Moss Point, Mississippi 39563. The funeral will begin at 11:00 am from the funeral home chapel with Rev. Randy Clark and Rev. Larry White officiating. A graveside will follow at 2:00 pm at Pleasant Hill cemetery 235 Shattles Loop Road Brooklyn, Mississippi 39425. Pallbearers will be Jeff Ruffin, Eddie Howard, Gibson Smith, and John Fagan. Holder-Wells Funeral Home in Moss Point, Mississippi is in charge of the arrangements.

Jack Dempsey Smith, 93 years old of Wade, Mississippi passed away into the arms of the Lord on December 15,2021 with his loving family by his side. He was born on December 26,1927 in Brooklyn, Mississippi. He served his country with pride and... View Obituary & Service Information

The family of Mr. Jack Dempsey Smith created this Life Tributes page to make it easy to share your memories.