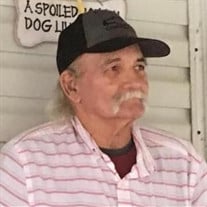 Obituary of James Ray Courtney On this day, December 30, 2019, an angel came and called James R. Courtney by his name and took him by the hand and said, “your place is ready.” James Ray Courtney (age 70) of Gautier Ms,.was born May. 30, 1949 in Hattiesburg, Ms. to Curtis J. Courtney and Lawson L. Bryant Courtney. He was preceded in death by his father , Curtis J. Courtney and his mother, Lawson L. Bryant Courtney, both of Gautier, MS. He is survived by his son Adam Collins (Caren) Ellisville, MS, and Ashley Buntin (Chris) Hamilton, MO, his two sisters Fa Nita Courtney Johnson (Richard) of Comer Ga, and Juanita Courtney Parks (Gene) of Simpsonville SC. Grandchildren: Alex Collins, Elizabeth Collins, Dakota Buntin, Christian Buntin, Aubrey Buntin, Riley Buntin, and Caden Buntin. A special memorial will be held Saturday, January 4, 2020, at FaNita and Richard Johnsons home in Gautier at 1:00 P.M for family and friends. So for now just remember that even though James will no longer begin his tomorrows with us, we will never be far apart, for every time you think of him, he will be there forever in our hearts.

The family of James Ray Courtney created this Life Tributes page to make it easy to share your memories.

Send flowers to the Courtney family.