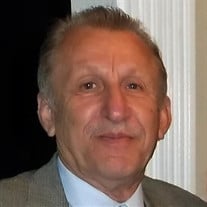 James L. "Jim" Doebler, 72, returned to his heavenly home on Thursday, May 9, 2019 after a valiant battle with a long illness. Jim was surrounded by his wife, daughter and son at the time of his death. His devotion to his family and his firm belief in God supported him in his struggle and ultimately gave him peace. Jim was born to the late Carl and Iva Doebler in Williamsport, Pennsylvania on July 24, 1946. He served as Sergeant in the United States Air Force. After serving his country, he began his 36 year career with the United States Postal Service retiring in 2005. After retirement, Jim spent quality time with his wife, children and grandchildren, loving and enjoying life. Jim was a loving husband, father and grandfather to his family and attended Ridglea Heights Baptist Church in Moss Point, Mississippi. Jim was blessed with a loving family. He married his best friend and soulmate, Glenda Dale Turner, on June 15, 1968 in Blytheville, Arkansas at First Church of the Nazarene. Jim helped raise his two children with patience, discipline and humility. He enjoyed baseball and football and taught his children many sport strategies as compared to all of life’s challenges. He often brought a smile to your face with his witty sport related humor. He enjoyed keeping his yard immaculate...just ask his nieces and nephews...they can tell you stories. Jim was an educator at heart. He was quick to answer a question, solve a problem, or give the best driving directions at any time. He will be dearly missed by his loved ones, who celebrate the fact that he is at peace with Jesus. Jim is survived by his wife, Glenda; his son and daughter-in-law, Chris and Kelly Doebler; his daughter and son-in-law, Tracy and David Reeves; grandchildren Matthew Reeves, Zachary Reeves, Madison Doebler, Lilly Doebler, Quinn Doebler; and a sister, Nancy Marshall. Jim was preceded in death by his sister, Joan Lewis; brother, Carl “Buster” Doebler; and parents Carl and Iva Doebler. Visitation will be held on Tuesday, May 14, 2019 from 11:00am until 1:00pm at Ridglea Heights Baptist Church, 12601 Hwy 613, Moss Point, Mississippi 39562. Funeral services will begin at 1:00pm from Ridglea Heights Baptist Church with Rev. Steve Cirlot and Rev. Dustin Stewart officiating. Interment will follow at Machpelah Cemetery in Pascagoula. Serving as pallbearers will be Jerry Standridge, Allen Turner, Steve Sabino, Greg Turner, Casey Long and Mel Smith. Honorary pallbearers will be Matthew Reeves and Zachary Reeves. Friends and family may share condolences at www.holderwellsfuneralhome.com. Jim's family would like to offer a special thank you for the loving care and concern shown by the nurses and staff of Hospice of Light. Funeral arrangements by Holder-Wells Funeral Home, 4007 Main Street, Moss Point, Mississippi 39563.

James L. "Jim" Doebler, 72, returned to his heavenly home on Thursday, May 9, 2019 after a valiant battle with a long illness. Jim was surrounded by his wife, daughter and son at the time of his death. His devotion to his family and his firm... View Obituary & Service Information

The family of James Leroy Doebler created this Life Tributes page to make it easy to share your memories.

Send flowers to the Doebler family.