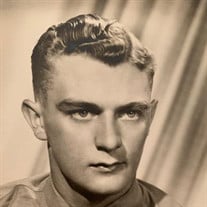 James “Jim” Harold Commerton 91, of Hurley passed away on December 30,2019 surrounded by his family. He was born in Seawarren, New Jersey on February 4,1928 to the late George P. Commerton and Lucy Holcroft Commerton. He graduated from Woodbridge High School and joined the United States Marine Corp in 1946 as an aviation mechanic and he served in World War II with pride and dedication. Jim married Gloria Glodic in December 7,1947 and they had three children. Jim and Gloria celebrated their 72nd anniversary in December 2019. Jim moved from New Jersey to be part of the “Start Up Crew” at the Pascagoula Standard Oil Refinery in 1963. He retired from the Chevron Pascagoula Refinery in 1985 after 35 years of dedicated service. In retirement he enjoyed spending time with his family, fishing and gardening. Jim was a prominent member of St. Ann’s Catholic Church in Hurley, MS and previously a member of Sacred Heart Catholic Church in Pascagoula. Jim was preceded in death by his son James H. Commerton Jr., his father George P. Commerton, his mother Lucy Commerton and his brother George P. Commerton Jr. He is survived by his wife Gloria Glodic Commerton of Hurley, his daughter Linda Milling (James) of Pascagoula, son Brian Commerton (Barbara), of Pascagoula. Three grandchildren Lisa Fallon (Rocky), Jason Scott (Leah) and Leslie Tillman (George). He will also be missed by his 10 great grandchildren, 13 great great grandchildren and devoted neighbors Ron Elias, Ken and Ann Taylor. Visitation will be Friday January 3,2020 from 1:00 pm to 2:00 pm at Holder-Wells Funeral Home Main Street Chapel 4007 Main Street Moss Point, MS. The funeral service will begin at 2:00 pm from the chapel with Father Peter Varghese officiating. Military rites will be conducted at the conclusion of the funeral. The family would like to extend a special thanks to Prada Home Care, Debra Allgood, Lorretta Easterling, Singing River Hospice of Light and Lisa Burroughs for their care and compassion during Jim’s illness. In lieu of flowers please send donations to Wounded Warrior Project in honor of James Commerton. Wounded Warrior Project P.O. Box 758517 Topeka, Kansas 66675 or www.woundedwarriorproject.com You may sign the online register book and send condolences to the Commerton family at www.holderwellsfuneralhome.com Holder-Wells Funeral Home in Moss Point, MS is in charge of arrangements.

James &#8220;Jim&#8221; Harold Commerton 91, of Hurley passed away on December 30,2019 surrounded by his family. He was born in Seawarren, New Jersey on February 4,1928 to the late George P. Commerton and Lucy Holcroft Commerton. He graduated... View Obituary & Service Information

The family of Mr. James "Jim" Harold Commerton created this Life Tributes page to make it easy to share your memories.

James “Jim” Harold Commerton 91, of Hurley passed away on December...

Send flowers to the Commerton family.