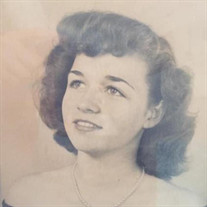 Heaven gained another angel when Jessie Myers passed away peacefully at her home Friday evening, October 23, at the age of 89. Jessie was born in Hattiesburg, MS, to Joseph Claude and Dorothy Mae Cagle Watson and was the older sister of Harold Ray Watson. She graduated from Forrest County Agricultural High School in 1949 where she was voted “Most Beautiful” her senior year. She went on to receive her nursing license from Methodist Hospital in Hattiesburg. She was married to Dr. Robert L. Thompson, Sr., with whom she had her three children, Robert (Bob) L., Jr., Jan Marie Clark, and Michael Thompson (Miki). In January 1980, Jessie married Dr. Robert (Bob) Beall, whom she considered to be her true love. They remained happily married until his death in September 2001. She later found friendship and love with Malcolm (Mac) Myers. They married in February 2005 and were together until his passing in April 2013. Jessie was a wonderful and devoted mother, grandmother, and great-grandmother. She showered her family with much love and attention as often as possible. She loved to travel, which took her to places all over the globe. She was an active member of First Baptist Church in Pascagoula before moving to Brandon and joining Flowood Baptist Church. Jessie is survived by her three children, three grandchildren, Jennifer (Jerad) Ladner, David (Mary Katherine) Clark, and Caroline Clark, and her three great-grandchildren, Alton Ladner and David & Michael Clark. She also leaves behind her stepmother Lucille Watson, brother Harold (Joyce), half-brother Chris, half-sister Dolores (Michael) Hensley, and their families. Also surviving Jessie are four stepsons, one stepdaughter, nine step-grandchildren, and ten step-great-grandchildren, all of whom she loved and cared for as her own. She will be dearly missed by them all. Visitation will be held at Holder-Wells Funeral Home in Moss Point on Tuesday, October 27, from 11am to 12:30pm. Services will be held following the visitation in the funeral home chapel. Burial will be at Jackson County Memorial Gardens in Pascagoula. Due to COVID-19 restrictions, masks and social distancing will be required. In lieu of flowers, the family is requesting that a donation be made to a preferred charity.

Heaven gained another angel when Jessie Myers passed away peacefully at her home Friday evening, October 23, at the age of 89. Jessie was born in Hattiesburg, MS, to Joseph Claude and Dorothy Mae Cagle Watson and was the older sister of Harold... View Obituary & Service Information

The family of Jessie Lee Watson Myers created this Life Tributes page to make it easy to share your memories.

Heaven gained another angel when Jessie Myers passed away peacefully...