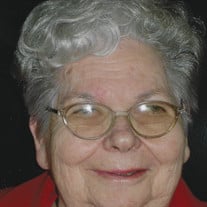 Mrs. Jimmie E. Watson,nee’Searcy, died peacefully at Ocean Springs Hospital on September 6,2019. She was 89 years old. She is survived by her two daughters, Zeta W. Fabyanic and Cathy W. Pittman and son-in-law, George N. Fabyanic all of Ocean Springs, MS, as well as a host of nieces and nephews. She was preceded in death by her husband, Eugene D. Watson (Gene), infant son and daughter who died at birth, in October 1956, parents Mittie and Tollie M. Girlinghouse and son-in-law, Larry C.Pittman. She was born on March 16,1930 in Winnsboro, LA. In May, 1950 she married Eugene D. Watson in Pascagoula, MS. They were married until his death in August,1999. She was a dedicated homemaker and mother to her two daughters. She was a member First Baptist Church of Gautier, MS. Visitation for Mrs. Watson will be Tuesday, from 1:00 pm to 2:00 pm at Holder-Wells Funeral Home at 4007 Main Street Moss Point, MS 39563. The funeral service will begin at 2:00 pm from the funeral home chapel with Rev. Mike Barnett and Rev. John Watson officiating. Burial will follow in Jackson County Memorial Park in Pascagoula, MS. Pallbearers will be Fred “Bubba” Thompson, Mark Watson, John Evan Watson, Joseph Watson, Thomas Baum, and Jeff Watson. The family would like to thank the wonderful nurses, support staff and Dr. Charles Frye at Ocean Springs Hospital who care for her during her final illness. They would also like to thank the staff at Sunplex Nursing Home in Ocean Springs for their care and compassion. In lieu of flowers, donation to the American Heart Association (heart.org) or Baptist Children’s Village (www.baptistchildrensvillage.com) are requested by the family. You may sign the online register book and send condolences to the Watson family at www.holderwellsfuneralhome.com Holder-Wells Funeral Home in Moss Point, MS is in charge of the arrangements.

The family of Mrs. Jimmie E. Watson created this Life Tributes page to make it easy to share your memories.

Send flowers to the Watson family.