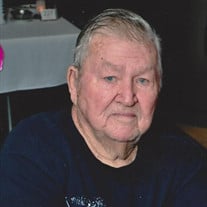 Mr. John August Schollian, 93, passed away on January 14, 2021, after a brief illness. Born on September 29, 1927 in Baltimore, MD to the late John August and Elizabeth Schollian (DeVage). As the first born of eight, he was often called &#8220;The... View Obituary & Service Information

The family of Mr. John August Schollian Jr. created this Life Tributes page to make it easy to share your memories.

Send flowers to the Schollian family.