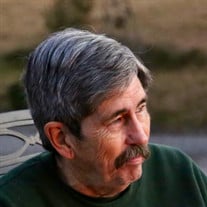 John L. Stonhouse, 74, passed away at his home in Mobile, AL on Sunday, December 15. Born September 5, 1945 in Flint, Michigan, to Al and Mary Stonhouse, John earned a bachelor's degree from Michigan State and a master's degree from Central Michigan University. He served as a Sergeant in the U. S. Army during the Vietnam War and was awarded multiple medals, including the Bronze Star for valor and bravery. John attended Lilly Orchard Baptist Church until his declining health prevented him from going out. He is survived by his loving wife of 32 years, Cindy, his three daughters Megan Goodman (David), Cortney Stonhouse and Nancy Slider, six grandchildren, and his sister, Kathy Bergeron (Ed). John enjoyed reading, bowling, playing basketball, and watching Michigan State sports. He also loved singing to anyone who would listen. His catalog ranged from Spirituals to Oldies to Bon Jovi. John had a quick wit, and was known for his snappy comebacks and clever puns. He wrote beautiful poems to his wife during their courtship, and to his daughter for special occasions. His favorite word was "Jeez", but he was never known to say "y'all" or "fixin' to", despite living in the South over 30 years. He often jokingly touted himself as "almost a doctor" because of his master's degree and lab experience as a trained microbiologist. John had a quiet way of helping people, and advocated organ donation. He was an avid blood donor who donated several gallons over his lifetime. To some, John’s acerbic wit could be abrasive at times, but those closest to him knew just how sweet and kind he really was. Like a geode rock, John Stonhouse appeared unassuming, but was filled with beautiful crystals on the inside. May he rest in peace. Visitation will be Wednesday December 18,2019 from 10:30 am to 11:30 am at Holder-Wells Funeral Home 4007 Main Street Moss Point, MS 39563. The funeral service will begin at 11:30 am from the funeral home chapel with the graveside service following at 1:30 pm at the Biloxi National Cemetery with military honors being conducted by the United States Army. The family would like to express their deepest gratitude to all of the caregivers at Southern Care Hospice and Alabama Hospice Care for the kind and loving care given to John. You may sign the online register book and send condolences to the Stonhouse family at www.holderwellsfuneralhome.com Holder-Wells Funeral Home in Moss Point, MS is in charge of the arragements.

John L. Stonhouse, 74, passed away at his home in Mobile, AL on Sunday, December 15. Born September 5, 1945 in Flint, Michigan, to Al and Mary Stonhouse, John earned a bachelor's degree from Michigan State and a master's degree from Central... View Obituary & Service Information

The family of Mr. John L. Stonhouse created this Life Tributes page to make it easy to share your memories.

Send flowers to the Stonhouse family.