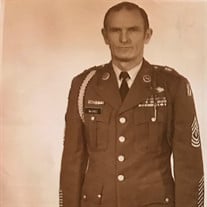 Julian Stanley McGhee, 93, died at Prescott, Arizona He was born 17 October 1925 in Durham, North Carolina and was a resident of Mississippi before living in Prescott Valley Arizona. Julian served his country with the United States Army from 1948 to 1978 where he retired in Wildflecken, Germany. His final assignment was as First Sergeant (E-8) with the 2nd Bn 15th Infantry, during his 30 years with the US Army during this period he was awarded Korean Service Medal, with Bronze Star, Vietnam Service Medal with Bronze Star, Combat Infantryman Badge, Air Medal, Good Conduct Medal, Republic of Vietnam Campaign Ribbon & Service Medal, Army Commendation Medal, and the Good Conduct Medal. During his career he was assigned to bases at Fort Benning, Georgia, Fort Hood, Texas, Fort Bragg, North Carolina, Fort Knox, Kentucky, Fort Benjamin Harrison, Indiana, New Ulm, Germany and US Army Training Area located in Wildflecken Germany, in addition to these assignments he served 2 tours in Korea and 2 tours in Vietnam. Julian will be joining his lovely wife Billie Jean McGhee and grandson Kyle Ryan McGhee in heaven with their Lord, Survivors include his five sons and daughter-in-laws, Stan and Heidi McGhee of Germany, Mike and Renee McGhee of Mississippi, Patrick McGhee of Nevada, Tim and Sarah McGhee of Arizona and John and Mina McGhee of Texas: 10 grandchildren Shawn McGhee of Nevada, Kevin and Allison McGhee of Germany, Amber McGhee of Texas, Brian McGhee of Mississippi, Keenan McGhee of Texas; Kyaa Jean, Jayden Quade, Josie and Tatum McGhee of Arizona; 3 great grandchildren Kylie, Payton, and Micah. Visitation will be Saturday 23 March 2019 from 10:00 am to 11:00 am at Holder-Wells Funeral Home 4007 Main Street, Moss Point, MS 39563. Funeral Services will begin at 11:00 am from the funeral home chapel with burial following in Serene Gardens cemetery in Moss Point with full military honors. In lieu of flowers, our Father would prefer if you just took a soldier/sailor/airman to lunch or dinner and thank them for their service. You may sign the online register book and send condolences to the McGhee family at www.holderwellsfuneralhome.com Holder-Wells Funeral Home in Moss Point, MS is in charge of the arrangements.

Julian Stanley McGhee, 93, died at Prescott, Arizona He was born 17 October 1925 in Durham, North Carolina and was a resident of Mississippi before living in Prescott Valley Arizona. Julian served his country with the United States Army... View Obituary & Service Information

The family of Mr. Julian Stanley McGhee created this Life Tributes page to make it easy to share your memories.

Julian Stanley McGhee, 93, died at Prescott, Arizona He was born...

Send flowers to the McGhee family.