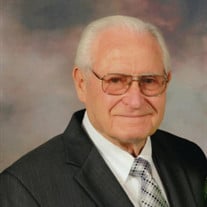 Kenneth Elford Smith passed away in God’s timing at his home on July 18, 2020, at the age of 88. He was born November 28, 1931, the oldest son of Charles Elford Smith and Jessie Dacus Owings Thackston Smith in Lyman, South Carolina. He graduated from Woodruff High School in Woodruff, South Carolina. He served in the United States Air Force in the 4080th Field Maintenance Squadron as an Airplane Mechanic rising to the rank of Staff Sergeant, also receiving the National Defense Service and Good Conduct medals. During his service to his country, he met and married his true love, Frances Lucretia Stokes of Blakely, Georgia. He graduated in 1959 with a Bachelor of Science in Electrical Engineering from Clemson University. He began his career as an electrical engineer at Duke Power Company in Burlington, North Carolina, and later Reidsville, North Carolina. A job change brought Kenneth and his family to Pascagoula, Mississippi in 1969 when he began at Ingalls Shipbuilding as an electrical engineer. He joined First Baptist Church of Pascagoula then and remained a member, being involved in their early television ministry. In 1972, he and Frances would begin to develop a number of local businesses including: JAD, Inc. (an electrical and general contracting company named after the initials of his three children), NCN (National Cable Network), Data Paging, Gulf Coast Engineering, WKFK-TV7 (Jackson County, Mississippi’s first local television station, initials for Ken, Fran, and Kids). Kenneth is preceded in death by his parents, Charles and Jessie Smith of Woodruff, South Carolina. He will be dearly missed by and is survived by his wife of 64 years, Frances Stokes Smith, his brother and sister-in-law, Milton and Vickie Rae Smith of Woodruff, South Carolina, his sister, Catherine Dart of Charlottesville, Virginia, a brother-in-law and sister-in-law, Pete and Mary Odum of Blakely, Georgia, a brother-in-law, Bob Fletcher of Albany, Georgia, a sister-in-law, Delana Stokes of Oklahoma City, Oklahoma. In addition, survivors include his three children and their spouses: Jeanne and Sonny Weeks, of Pascagoula, Mississippi, Dan and Deonda Smith of Ocean Springs, Mississippi, Anna and Joe Prestridge of Gulf Breeze, Florida; his grandchildren, Jason Weeks of Pascagoula, Mississippi, Josh and Amber Weeks, of Vass, North Carolina, Errick Smith of Fort Worth, Texas, Alston Smith of Atlanta, Georgia and Ian Prestridge of Gulf Breeze, Florida; his great-grandchildren, John Paul Weeks and Eli Weeks of Vass, North Carolina, and many nephews, nieces, and cousins. “Mr. Ken” as he was affectionately known, dearly loved his family, was honest “as the day is long”, had an uncompromising work ethic, and was always ready to give advice or help to those who needed it if he could. Instead of flowers, the family requests memorials to First Baptist Church of Pascagoula, Mississippi, or the St. Jude’s Children’s Cancer Hospital in Memphis, Tennessee or just leave a place better than you found it by feeding “the little creatures” in his memory. Visitation will be held Thursday, July 23, 2020, from 9:00 a.m. until 10:00 a.m. at Holder-Wells Funeral Home, 4007 Main St., Moss Point, MS. Graveside services will be at 10:15 a.m. at Machpelah Cemetery in Pascagoula, MS., with Rev. Dennis Ray Smith officiating. Pallbearers will be his son and grandsons. Regretfully, due to Covid-19 restrictions, face masks and social distancing are required. A maximum of 10 people are allowed in the funeral home at one time. A maximum of 20 people is allowed at the graveside service. You may sign the online register book and send condolences to the Smith family by visiting our website at www.holderwellsfuneralhome.com Holder-Wells Funeral Home, Moss Point, MS., is in charge of arrangements.

Kenneth Elford Smith passed away in God&#8217;s timing at his home on July 18, 2020, at the age of 88. He was born November 28, 1931, the oldest son of Charles Elford Smith and Jessie Dacus Owings Thackston Smith in Lyman, South Carolina.... View Obituary & Service Information

The family of Mr. Kenneth E. Smith created this Life Tributes page to make it easy to share your memories.

Kenneth Elford Smith passed away in God’s timing at his home...