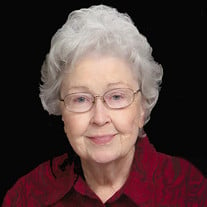 Lafay Morse Byrd, 85, of Pascagoula, passed into the presence of her Savior, Jesus Christ on Tuesday, July 30, 2019. She had been a resident at "Amelia’s Garden", a nursing home in Lucedale for one and a half years. Lafay was born in Hattiesburg, Mississippi to Garvice and Lucille Morse. They moved to Gautier when Lafay was a teenager and she graduated from Pascagoula High School in 1951. She is survived by her daughter, Dianne Byrd Terry and husband Wayne of Shawnee, Kansas; and her son, Joseph Wayne Byrd and wife Sheila of Lucedale, Mississippi. Additionally, Lafay leaves seven grandchildren, Melissa King of Midland, Texas, Sean Terry of Leavenworth, Kansas, Kevin Terry of Milliken, Colorado; Natalie Delk of Wade and Brandon Byrd of Pascagoula, Christopher and Andrew Olander of Nashville, Tennessee. She has nine great-grandchildren, Kylie and Kameron King of Midland, Texas, Austin and Samantha Terry of Leavenworth, Kansas, Callie Mundy and Chloe Terry of Milliken, Colorado, and William, Trevor and Colton Delk of Wade.She was pre-deceased by her parents, Garvice and Lucille Morse, her husband Joe W. Byrd, and a daughter, Laura Byrd Olander. Lafay was a military wife for twenty years, living in Germany, Okinawa and different states across the United States. When the military life was over, she came back to Pascagoula to live out her remaining years. She had friends all over the states and stayed in touch with each of them. You could always expect a Christmas Card from Lafay. She was a member of Eastlawn Baptist Church much of her adult life where she sang alto in the choir, taught Vacation Bible School, and was faithful in her ladies’ Sunday School class until her health prohibited it. She later followed her son and daughter-in-law in joining Arlington Heights Baptist Church and attended as health permitted. Lafay was a Christian and loved her Lord. She raised her children to go to church, taking them each Sunday, and Wednesday, from the time they were two weeks of age. When she and her children joined her husband, Joe, in Germany and found there was no Sunday School classes available, she and Joe organized Sunday School for the neighbor kids in their living room on Sunday mornings. No matter where they lived in the world, Lafay found a way to make sure her family was serving God. In Lafay’s last years, she had some health issues which began to slow her down considerably. Eventually she was admitted to Amelia’s Garden, a compassionate nursing home where they helped make her comfortable and relieve the pain. Her memory began to fail until most of her life memories were entirely gone. When Lafay went to heaven, she finally saw her Jesus face-to-face. All her pain was gone, and we are sure, she danced on the streets of gold. Her precious memories were all restored and there was an awesome celebration in heaven as she met friends and relatives she had been missing for years. There is a hole in our hearts as we mourn her passing, but we have the blessed hope and peace that we will see her again. Visitation will be held from 9:00 until 10:00 am on Saturday, August 10, 2019 with the funeral service beginning at 10:00 at Holder-Wells Funeral Home, 4007 Main Street, Moss Point, Mississippi 39563. Interment will follow with a graveside service at Dixie Baptist Church in Hattiesburg at 2:00 pm. Friends and family may sign an online register and send condolences to the Byrd family at www.holderwellsfuneralhome.com. Arrangements by Holder-Wells Funeral Home, Moss Point, Mississippi 39563.

Lafay Morse Byrd, 85, of Pascagoula, passed into the presence of her Savior, Jesus Christ on Tuesday, July 30, 2019. She had been a resident at "Amelia&#8217;s Garden", a nursing home in Lucedale for one and a half years. Lafay was born in Hattiesburg,... View Obituary & Service Information

The family of Mrs. Lafay Morse Byrd created this Life Tributes page to make it easy to share your memories.

Lafay Morse Byrd, 85, of Pascagoula, passed into the presence...