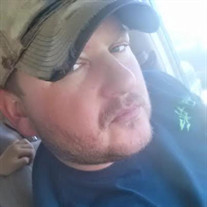 Larry Richard "Ricky" Winstead, Jr. 44 of Pascagoula, Mississippi, passed from this life on Thursday, February 27, 2020 at Singing River Hospital, surrounded by his family and many friends. Ricky was preceded in death by his father, Larry Richard Winstead, Sr.; maternal grandparents, Roy and Eunice Simmons; paternal grandparents, Jesse and Louise Winstead; and an Uncle, Greg Simmons. He is survived by his loving wife of fifteen years, Dianna McLeod Winstead; daughters, Katelyn and Madelyn; sons, Dylan and Caleb; Nacole McLeod and Uncle Dean; his mother, Deborah Winstead Creel; step-father, Larry Creel; and a great uncle, Joseph (Kerri) Simmons as well as numerous aunts and uncles. Ricky is also survived by his three sisters, Tammy Winstead (Trisha) Buckner, Lori (Brian) Ribble and Tracy (Kevin) Walters. Ricky was deeply loved by his nieces and nephews, Brittni, Megan and Mayson Sirmon and Breanna, Joshua, Christopher and Jonathan (Hayley) Walters; Uncles, Gene (Vickie) Winstead, Butch (Dale) Winstead, Mike Winstead; great aunts, Rosie (Jimmy) Hall, Eva (Larry) Hayden, Mary Parker. Ricky loved playing baseball and was a well known pitcher on the Pascagoula High School team from 1991-1994. Even after his baseball days were over Ricky and his children would spend hours outside, playing the family sport. After graduation, Ricky worked as a security guard at VT Halter Marine, eventually working his way up to Warehouse Supervisor over the 15 years he was employed there. Ricky was a hard worker, but he always knew how to have fun, especially around his closest family and friends. He is greatly loved and will be missed by many, but the hearts of the family are at peace knowing that he is with his Lord and Savior and no longer suffering. A memorial service for Ricky will be held on Friday, March 6, 2020 from 3:00 until 6:00pm at Pascagoula Beach Park in Pascagoula with Sister, Jeanne Marie officiating. Friends and family may share condolences at www.holderwellsfuneralhome.com. Arrangements by Holder-Wells Funeral Home 4007 Main Street, Moss Point, Mississippi 39563.

Larry Richard "Ricky" Winstead, Jr. 44 of Pascagoula, Mississippi, passed from this life on Thursday, February 27, 2020 at Singing River Hospital, surrounded by his family and many friends. Ricky was preceded in death by his father, Larry Richard... View Obituary & Service Information

The family of Larry Richard "Ricky" Winstead created this Life Tributes page to make it easy to share your memories.

Send flowers to the Winstead family.