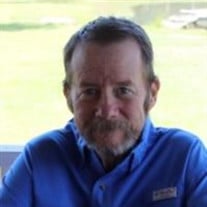 Leroy “Chuck” Carver,56, was born August 17,1964 to the late Lee and Sue Jean Carver in Toms River,NJ. After several moves, his family moved to Mississippi when he was 7 years old. He graduated Moss Point High School in 1983 where he went straight into the electrical apprenticeship program at Ingalls. He worked at Ingalls for 35 years in the Electrical Department until he had to medically retire. He made so many close friends over the years through the yard and even gained the nickname “Elf”. He also for many years was a part of the Escatawpa Volunteer Fire Department,even served as Fire Chief for several years. He also was part of the Jackson County Search and Rescue for many years as well. He had a kind and loving heart. He loved helping anyone he could. It didn’t matter how little he had, he would still give his last dollar to help someone. He loved spending time with his daughter and her husband who he called “son” and 3 grandchildren and his adopted children and grandchildren. He loved his Lord and Savior and loved to tell his testimonies of everything his Lord and Savior had brought him through. He was a member of Cross Roads Baptist Church. He left behind a legacy that will never be forgotten and will be cherished by many. He is preceded in death by his parents Lee and Sue Jean Carver and brother in law David Harrison. He is survived by his daughter and her husband, who he spent his final days with, Randy and Heather Tapper, Helena,MS. His 3 grandchildren Kylie Treece, Jaxon Tapper, and Wyatt Tapper. His sisters Ann (Wayne) Johnson and Edre Dassler all of Foley AL, Susan Harrison of Canton, GA, Judy Taylor of Gainesville, GA, Jane(Mike) Hayden of Ocean Springs, MS, and Leslie Shaw of Rock Hill, SC. He is also survived by his brother Guy(Susan) Carver of Thomasville, NC. Also numerous nieces and nephews. He also leaves behind His parents and brother in love as he called them Kenneth and Faye McLeod and Robbie Nelson. He also had so many friends he called his brothers and sisters and adopted children and grandchildren. Visitation will be on Saturday August 29,2020 from 12:00pm to 1:00pm at Holder-Wells Coastal Funeral Home location at 12800 Highway 613 in Moss Point. Graveside services will follow at 1:30 pm at Macphelah Cemetery in Pascagoula. Pallbearers will include Randy Tapper, Robbie Nelson, Mike Shields, Philip Franklin, Richard Horsley, and Bo Carroll. In lieu of flowers he requested donations to be made to the Escatawpa Volunteer Fire Department. To send donations in his honor the address is 3801 Sentinel Dr. Moss Point, MS. 39562. Due to the Covid 19- Pamdemic a limited number of people will be allowed in the funeral home. Face mask and Social Distancing will be required. You may sign the online register book and send condolences to the Carver family at www.coastalfuneralhome.net or holderwellsfuneralhome.com Holder-Wells Coastal Funeral Home is in charge of the arrangements.

Leroy &#8220;Chuck&#8221; Carver,56, was born August 17,1964 to the late Lee and Sue Jean Carver in Toms River,NJ. After several moves, his family moved to Mississippi when he was 7 years old. He graduated Moss Point High School in 1983 where... View Obituary & Service Information

The family of Mr. Leroy "Chuck" Carver created this Life Tributes page to make it easy to share your memories.

Send flowers to the Carver family.