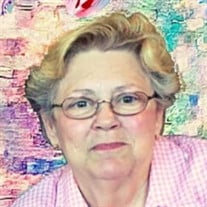 Marian “Dedi” Ballatin, born on September 27, 1942, passed away peacefully on March 10, 2022, at the age of 79. Her love of culture and travel began as a young child where she lived abroad in Japan and Brazil. She later graduated in 1960 from Providence Catholic High School in Alexandria, LA. As a young adult, Dedi was a Flight Attendant for Eastern Airlines where she enjoyed traveling and experiencing the world. During that time, she considered herself fortunate to live in various big cities such as Washington, D.C., Atlanta, and New Orleans. Her next adventure embraced her love of animals where she was a licensed dog breeder and owned and operated a grooming business in Pass Christian, MS. Dedi was proud of her pure-bred poodles, Francie and Magic, who won several prestigious dog show awards. As a brilliant artist, she continued to express her vivid affection for animals through her artwork. With a passion for continued learning, she completed her Master’s Degrees in English and Art from University of Southern Mississippi. Later she became an English Literature Professor where she taught students at MGCCC and Airmen at Keesler Air Force Base. Due to Hurricane Katrina’s displacement, Dedi retired and moved from Pass Christian to Escatawpa, closer to family, where she was accepted with open arms by everyone. There she spent her senior years sharing her knowledge and talents. She especially enjoyed making memories, telling stories, and teaching her skilled art abilities to her beloved young cousin Madelyn Bardwell, who adored her. She was proceeded in death by her parents, brother, sister, and fur companion Luna. Dedi is survived by her dedicated and loving cousin, Lorraine (Ray) Vaughan of Hurley, cousins Lawrence Whatley of Pascagoula and Patrick (Patricia) Downing of Mobile, her nephews Matt (Erica) Brown of Greshem, Oregon, Troy Ballatin of New Orleans, and niece Meredith (Tim) Wooten and great-nephews Kameron and Kayden of Tacoma, WA, and other close family members William, Tina, & Nicolas Denton, Bruce, Mandy, Madelyn & Kameryn Bardwell, Louis and Kacie Bienvenu, Laura Bardwell, and Carla Burtt. She was also cherished by many friends, especially her coffee drinking buddies Nancy, Charles, Steve, Elaine, and Arnie. Dedi, an extremely grateful women, will be remembered as a mastery artist, well-educated, articulate women who loved conversations about her travels, history, astrology, literature, and world events. Although there will be no service per her request, she will be missed by many. Her loved ones are comforted by the joyous reunion she is now having. Holder-Wells Coastal Funeral Home served The Ballatin Family.

The family of Ms. Marian "Dedi" L. Ballatin created this Life Tributes page to make it easy to share your memories.

Send flowers to the Ballatin family.