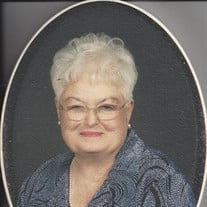 Marjorie Jo Metcalf Carlow passed into heaven on Monday, December 14, 2020. She was born in Holdenville, Oklahoma on December 10, 1932. She graduated from Holdenville High School and earned an Associate Degree Intensive Business Training at what was then called Oklahoma A&M College. After college, she went to work for the Navy at McAllister Ammunition Depot. Marjorie was first seen by her future husband Sterling “Kay” Carlow at an NCO Club Costume Party. Marjorie was dressed as Daisy Mae; and Kay said to himself, “That’s the cutest thing I’ve ever seen!” Marjorie married her husband Sterling “Kay” Carlow on March 17, 1960. After her husband was discharged from the Marines, the couple moved to Fort Worth, Texas, where Marjorie went to work for the Army and, eventually, the Air Force. Then the young family moved to Pascagoula, Mississippi, where the couple became very active in Eastlawn United Methodist Church and the Civitan Club. At Eastlawn, Marjorie was the Church Newsletter Editor for 16 years, until she retired to join her husband in his retirement. She was active in the Administrative Council, United Methodist Women, Mamie Kimbrough Homemakers Circle, as well as attending the District Conferences as Church Representative for several years. In Civitan, Marjorie was an active member who represented the Pascagoula Civitan Club at District Conventions as well as several International Conventions. Marjorie was a loving wife and mother. She loved her family, her many friends, and her church. Marjorie was always there to take care of her family. She taught her daughters to be positive, to love people, and to love God. Marjorie loved to sing. She began singing as a young adult in Oklahoma and even got to sing on the radio there. She loved singing in Eastlawn United Methodist’s choir for many years; and music was forever in her heart. Marjorie loved to send cards. Oh, the thousands of cards she must have sent over the past 50 years, as an extension of God’s own hand, encouraging others when they needed it! Marjorie faithfully sent cards to the homebound at Eastlawn United Methodist and many birthday cards, get well cards, and “thinking of you” cards to friends and family, even when Parkinson’s Disease took her ability to write them. To quote her niece Georganne Thomas, Marjorie was a sunbeam who spread her light to everyone and has bloomed anywhere she was planted. She bloomed at Seashore Highlands Assisted Living and later at Greenbriar Nursing Center. She was loved by staff and residents, always trying to be an encourager to all. Preceding Marjorie in death are her parents, Harry and Eva Metcalf of Holdenville, Oklahoma, and her siblings Alga Bray, H.N. Metcalf (Dorothy), Annie Nuckols (Matt), and Oleta Gentry (Berry), and grand-daughter Elena Claire Lacoste. Elena is undoubtedly kissing her Mimi’s face right now, shouting her customary “a thousand kisses, Mimi!!!” until they both laugh hysterically. Marjorie is survived by her husband, Sterling “Kay” Carlow, her daughters Linda Carlow (Anita) and Barbara Lacoste (Jeff), grand-daughter Evita Rae Lacoste,her sister-in-law Ada "Jean" O' Berg, her brother-in-law Earl Carlow,her sister-in-law Earlene Wilson (Jim),her sister-in-law Joan Johnson (Fred), many nieces and nephews, and best friend Opal Currie. A celebration of life will be held at Holder Wells Funeral Home Chapel at 2 PM on Saturday, December 19, 2020. Friends and family may come for visitation from 1-2 PM. A graveside service will be Monday December 21,2020 at 1:00 PM in the Jackson County Memorial Park Mausoleum Building. In lieu of flowers, the family prefers donations in her memory to Eastlawn United Methodist Church, 2502 Ingalls Ave., Pascagoula, MS 39567 or to Civitan International Research Center, P.O. Box 139744, Birmingham, AL 35233. Due to the Covid-19 Pandemic face mask and social distancing will be required in the funeral home. You may sign the online register book and send condolences to the Carlow family at www.holderwellsfuneralhome.com Holder-Wells Funeral Home 4007 Main Street Moss Point, Mississippi 39563 is in charge of the arrangements.

The family of Mrs. Marjorie Jo Metcalf Carlow created this Life Tributes page to make it easy to share your memories.

Send flowers to the Carlow family.