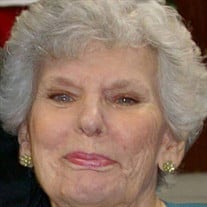 Mary Alice Miller, age 81, of Moss Point, passed away on Saturday April 25, 2020. She was born on September 21, 1938, in Jones County, MS, to Edward and Mertie Walley Williams. On March 6, 1960 she married Joe Burl (J.B.) Miller, also of Jones County, MS. J.B. and Mary were happily married for 49 years until his passing in January 2010. She is survived by 2 daughters, Teresa J. Miller and Sandra J. Miller, both of Pascagoula; son, James E. Miller of Mobile AL; brothers, Danny Williams of Moss Point, David Williams of Boerne, TX, and Michael Williams of Picayune; sisters, Donna Huddleston of Helena, Marcell Ainsworth of Stringer, and Edith Williams Zamudio of Dallas, TX; grandchildren, Joel A.J. Miller of Mobile, Ashley M. Miller Ulrich of Lagrange, IN, and Jamie Lynn Miller Martin of Mobile; and great grandchildren, Olivia, Logan, Anna Rose, Claire, and Jackson Ulrich, all of Lagrange, IN, Also, Eliza and Evie Martin of Mobile. Mary was preceded in death by her sister, Betty Farve, and brothers, Robert Williams and Larry Williams. Mary had a long and distinctive career in Human Resources, working in various companies, with her longest tenure at First Chemical Corporation in Pascagoula, MS. She was also a member of numerous associations, both civic and professional, and was well-respected by her family, friends, colleagues and associates. Mary was a member of Wade Baptist Church, in Wade MS, and had many friends among the membership. She was previously a member of Arlington Heights Baptist Church, in Pascagoula MS. She was very active in her church and volunteered often in various ministries including, Women’s Missionary Union, Sunday School, Choir, and other areas of ministry. Mary also loved hosting friends and family for parties, BBQ’s, holidays, birthdays and other occasions. She will be greatly missed by her family and all of those who came to know her.

The family of Mary Alice Miller created this Life Tributes page to make it easy to share your memories.

Send flowers to the Miller family.