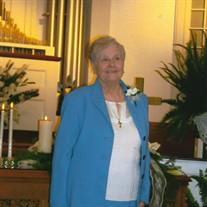 May Potts Ezell was born October 29, 1925 in Warrington England as an only child. May grew up in war torn Europe and found herself frequently in bomb shelters as the Nazi’s bombed England during WWII. As the Americans came to England, May was very involved in supporting the war effort. One afternoon, May, accompanied by her cousin, stepped out of a Tea Shop after a “spot of tea” and that’s when she ran into PFC Billy Ezell on the side walk. Love at first sight, Billy followed her home. Later he returned to ask her father’s permission to visit with her. Her dad answered the door, called out to May there is a “Yank” here to see you!! May and Bill wed in England where they lived for 20 years until they moved back to Bill’s hometown of Pascagoula in 1965 where they spent 63 years together before he passed. May was a loving and caring person and actually kept the nursery at First Presbyterian Church in Pascagoula for nearly 50 years, where she was a life long member. The church honored May with naming the nursery after her where she administered love and care to all the children for so many years. May never renounced her British citizenship and loved the Queen. She maintained relationships for many years with her British family and friends. They would come across the pond and visit her in America. She maintained her original British dialect never relenting in her love for the Crown. Many people would come to her house just to hear her talk. Everyone that knew May ended up eating one of her world famous “sausage rolls”, which made many a wedding table. She was a great cook and specialized in English dishes. She and her husband loved the English candies and spoiled all the grandkids with the sweets from overseas. Everyone loved May and while her passing is a loss of great love for us, we know she is dancing with her Husband again. May is preceded in death by her loving parents, Edward Potts and Florence M. Cooper, child Brian Mills Ezell and her Husband Hugh “Billy” Ezell. She is survived by her sister-in- law, Marie Ezell Tillman. She is also survived by her children; Edward L. Ezell, Alan W. Ezell Sr.( Carol), Susan M. Nichols, Mamie D. Futch (David) and John M. Ezell (Angela) Her grandchildren, Tracy Ezell Kington,(Lance) JoAnn Ezell Batory,( Michael) Alan W. Ezell Jr. (Nicole) Lane E. Futch, Lauren T. Smith (Rob), Johnathan Ezell(Shana), Hannah Clayton(Scott), Cody Ezell, Brittaney D. Pierce, and Brandon L. Pierce. Her great-grandchildren, Cody A. Silva , Kaitlyn R. Batory, Kristopher B. Ezell, Mason A. Ezell, Tanner Ezell, Layla Ezell, Connor J. Pilger, Anna K. Pilger, Kailey M. Pilger, Kinsey Smith, Judson Hugh Burlison, and Molly Ann Clayton. The family would like to extend their heartfelt thanks to Sandra Frederic, Therese Demetropoulos, Melania Moore and Ann Merritt for their many visits to her home and hospital. They would also like to extend their gratitude, love and support , Kerrie Frederick Williams, Susanne Buttons and Lane Jones. And a Special thanks to the outstanding staff in the Singing River Hospital NICU, therapy unit and to Doctor Whitlock, Doctor Quintana, Doctor Babar and Cindy Jensen NP for their extraordinary care during her many years of illness. As May was blessed to have their special care. God Bless them. Serving as pallbearer's; Alan Wayne Ezell, Sr., David Carson Futch, Johnathan Mills Ezell, Cody Lane Ezell, Robert Barksdale Smith III, Joseph Lane Jones. Honorary pallbearer's; Donald Williams Stewart Jr., Judson Hugh Burlison and Connor Jason Pilger. Visitation will be Monday June 17,2019 from 10:00am to 12:00pm at the First Presbyterian Church of Pascagoula. The funeral service will begin at 12:00pm from the church sanctuary with Rev. Matt Mitchell officiating. Burial will follow in Machpelah cemetery. In lieu of flowers, the family wishes any donations to be made to the First Presbyterian Church Pascagoula and St. Jude’s Children Hosptial. You may view and sign the online register book and send condolences to the Ezell family at www.holderwellsfuneralhome.com Arrangements are by Holder-Wells Funeral Home at 4007 Main Street Moss Point, MS

May Potts Ezell was born October 29, 1925 in Warrington England as an only child. May grew up in war torn Europe and found herself frequently in bomb shelters as the Nazi&#8217;s bombed England during WWII. As the Americans came to England,... View Obituary & Service Information

The family of Mrs May Potts Ezell created this Life Tributes page to make it easy to share your memories.

Send flowers to the Ezell family.