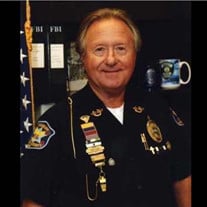 James Micheal “Mike” Byrd, 71, of Hurley, MS passed away on November 5, 2020 due to complications from Covid - 19. He was born in Pascagoula, MS on November 5, 1949 to Cecil, Sr. and Elizabeth Byrd. Mike was a 1968 graduate of Pascagoula High School, attended Mississippi Gulf Coast Community College for two years, and graduated from the FBI Academy. After attending school, he began his law enforcement career with the Jackson County Sheriff’s Department in 1972. He then went onto work for the Moss Point Police Department in 1976, and later to the City of Gautier Police Department in 1987. In 1999, he continued to pursue his life’s calling, by running for the office of Jackson County Sheriff, and won, where he served his community for four consecutive terms until his retirement. His other passions in life were singing gospel music for his church family and the community. Mike was an active member at both St. Ann’s Catholic Church and Hurley United Methodist Church. He also loved to chaperone youth trips, while mentoring the students on the many different adventures they took. Mike was also a baseball coach for 22 years and the league president for 7 years. During this time, he also loved to umpire both baseball and softball games. Mike was a true and humble servant in so many ways to his community and to the people. He loved to volunteer to cut yards, repair people’s homes and the church, and just lend a hand in any way possible. Mike was always one to tell a good joke, or to give an encouraging word. Mike was proceeded in death by his parents, Cecil, Sr. and Elizabeth Byrd; in-laws, Burt and Evelyn Wilburn; and son Terry Micheal Byrd. Those left to treasure his memory include his beloved wife Terri Byrd; children, Michelle Byrd, and Kim (Tony)Giacone; daughter - in - law, Ashley (Jamey) DeVitt; honorary son, Bob Dilliard; grandchildren, Shayne (Julie) Giacone, Austin(Bethany) Byrd, Ariel (Jesse)Chandler, Steven Byrd, Isabella Giacone, Grayson Giacone, Jacey DeVitt, Josey DeVitt, and Grady DeVitt; honorary grandson, Lil Bob Dillard; great grandchildren, Remmy Giacone, Kimber Giacone, Micheala Giacone, and Gunner Byrd; brother, Cecil(Cindy)Byrd, Jr.; sister, Bettye Byrd Welton; and numerous other family and friends. His family is devastated by his loss, but trust wholeheartedly in the hope of Jesus Christ. Funeral services will be at St. Joseph’s Catholic Church, Moss Point, MS on Wednesday, November 11. Family will receive visitors 10am – 1pm with the funeral service beginning after the visitation. Father Peter Varghese and Reverend David Henderson officiating. Burial will follow in Serene Gardens cemetery in Moss Point with Law Enforcement Honors. Serving as pallbearers will be his grandsons Austin Byrd, Shayne Giacone, Steven Byrd, Jesse Chandler, Lil Bob Dillard and Son-in-Law: Tony Giacone At the request of the Byrd family and St. Joseph Catholic Church please observe social distancing and wear face mask as required at the church. You may sign the online register book and send condolences to the Byrd family at www.holderwellsfuneralhome.com Holder-Wells Funeral Home 4007 Main Street Moss Point, Mississippi 39563

The family of Mike Byrd created this Life Tributes page to make it easy to share your memories.