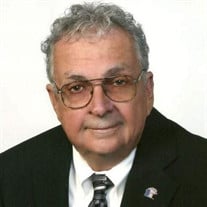 Mr. Milton William Southern, 86, of Forts Lake, passed away Sunday, August 4, 2019 in Pascagoula, Mississippi. He was born November 24, 1932 in Pascagoula, MS, to Albert Southern, Sr., and May Belle Taylor Southern. He was retired from the... View Obituary & Service Information

The family of Mr. Milton William Southern created this Life Tributes page to make it easy to share your memories.

Send flowers to the Southern family.