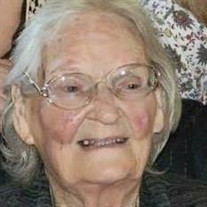 Minnie Jane Smith Brister, 94, passed from this life on Tuesday, September 25, 2018 at her home in Moss Point. She was born August 12, 1924 in Pascagoula. Mrs. Brister enjoyed gardening, sewing and was an avid reader. She was dedicated to her... View Obituary & Service Information

The family of Minnie Jane Brister created this Life Tributes page to make it easy to share your memories.

Minnie Jane Smith Brister, 94, passed from this life on Tuesday,...

Send flowers to the Brister family.