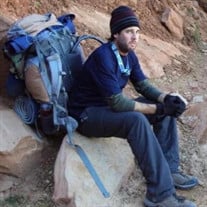 Nicholas Capdepon 34, of Moss Point, Mississippi passed away on May 1, 2022. Nicholas was born at Singing River Hospital on July 1,1987. Nicholas was baptized and received his first communion at Sacred Heart Catholic Church. He attended Resurrection Catholic School from Kindergarten thru the 12th grade. He always had an adventurous sprit and lived life the way he thought it should be. Always willing to try different food, he had a real passion for travel, and the many friends he collected from all walks of life kept his life very interesting. He never had any enemies and was a kind and loving soul. In his short life he traveled to England, France, Germany, the Czech Republic, Mexico and the Caribbean as well as most of the United States. Nick was actively involved in the Saltillo Mission and participated in trips to the Saltillo Mexico Mission while attending RCS. He played soccer throughout his school years and then ran cross country in high school. However, music was the thing that really made him happy and spent many hours playing his beloved guitars. He rode his first motorcycle at the age of 7 and enjoyed that hobby for the rest of his life. He also spent a great deal of time on the water with his family and friends fishing and exploring the Gulf Islands and Pascagoula River. He had many close friends in Florian Von Loquenghein from Stuggart, Germany who lived with the Capdepon family for a year while attending RCS High School. He was an avid reader from a young age and comprehended what he read very well. He was awarded a scholarship to attend Springhill College in Mobile, Alabama and attended several other colleges. Nick hiked the Grand Canyon and later participated in the World Organization of Organic Farmers in Oxford, MS, and Washington state. While in Seattle he once hiked Mt. Rainier with a friend and was nearly trapped in a blizzard but was rescued by a park ranger. He also became interested in hunting later in life and killed his first deer in 2020. After attending Mississippi Gulf Coast Community College vocational classes, he worked with a plumber and learned a great deal about the trade eventually using his experience to help him rebuild the house he was planning to soon be living in. Nick was proud of his progress he made on his long road to recovery and that led to the decision he made in 2021 to get a CDL and enter the profession of OTR trucking, driving over 140K miles in the last year. He was very excited and shared many details of his long journeys behind his Kenworth T 680 he drove all over the Eastern United States from New York to Tampa Florida and as far west as Colorado. He used his experiences on the road to encourage other younger drivers to be professional and courteous. He shared many of scenic and sometimes entertaining videos online usually ending with “y’all take care and be good to each other”. During the last few months Nick was learning to play the banjo. He was preceded in death by his grandparents Doris and Hilliard Hawkins Jr., uncle William Hilliard Hawkins III and his grandmother Betty Jean Capdepon. He is survived by his parents Deborah and Stephen Capdepon and his grandfather Ronald Stephen Capdepon, aunts and uncles Pam and Ronnie Sheldon, Paula and Ron Davis, Thomas and Vickie Cox, and Richard and Danette Hawkins. His cousins Andrew and Seth Sheldon, Victoria and Ryan and their daughter Harper, Jonathan and Julie Cox, Chase Hawkins, Connor and Tierney Hawkins and their daughter Millie Ruth. He also leaves behind numerous friends. Visitation will be Saturday May 7,2022 from 10:00 am to 11:00 am at St Joseph’s Catholic Church 4114 First Street Moss Point, Mississippi 39563 with Mass starting at 11:00 am from the church sanctuary with Father Peter Varghese presiding. In lieu of flowers the family wishes donations to be made to Resurrection Catholic School in memory of Nicholas. You may view the online register book and send condolences to the family at www.holderwellsfuneralhome.com Holder-Wells Funeral Home 4007 Main Street Moss Point, Mississippi 39563 is in charge of the arrangements.

Nicholas Capdepon 34, of Moss Point, Mississippi passed away on May 1, 2022. Nicholas was born at Singing River Hospital on July 1,1987. Nicholas was baptized and received his first communion at Sacred Heart Catholic Church. He attended Resurrection... View Obituary & Service Information

The family of Nicholas Capdepon created this Life Tributes page to make it easy to share your memories.

Send flowers to the Capdepon family.